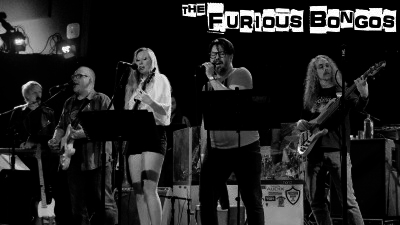 The Furious Bongos are extending the season of Halloween shenanigans and observing the unofficial holiday of Frank Zappa! They’re returning to some of their favorite venues and expanding into new territory as things are rapidly growing for this fiery band. Bring your ponchos…or your best Zomby Woof costume!

When bassist/arranger Conrad St. Clair decided to tackle this project, knowing Zappa drew on influences ranging from Stravinsky to Leadbelly, he felt it was important to assemble musicians with backgrounds as farflung as Zappa's influences. As a result, the band has a heavyweight and eclectic collective resume, including work with artists like Yo Yo Ma, India Arie, Mick Fleetwood, and Les Paul. In addition to the band members you’ve come to know and love, this tour will also feature the amazing violinist Randal Harrison and master mallet player Matt Peters, as well as Grammy-winning Jay Frigoletto on keyboards for the first half of the tour.

Since Zappa's music was constantly evolving and adapted to the musicians he was playing with at a given time, doing a note-for-note rendition of Song X from Album Y while staring at their shoes didn't seem like the proper way to go about this project. The Furious Bongos tracked down hundreds of pages of transcriptions and quickly scribbled notes from former band members and other sources, painstakingly compared different versions of the songs, and even dug up copies of rare scores in Frank's own hand (coffee stains included). The end result is arrangements that you won’t hear anywhere else.

The Furious Bongos understand that however people describe Zappa, safe or vanilla aren't usually first in mind. And, they appreciate Frank's role as an entertainer, not just as a composer It’s a show that pays respect to an iconic legacy but is still new and different and dangerous and FUN, with lots of eyebrows.