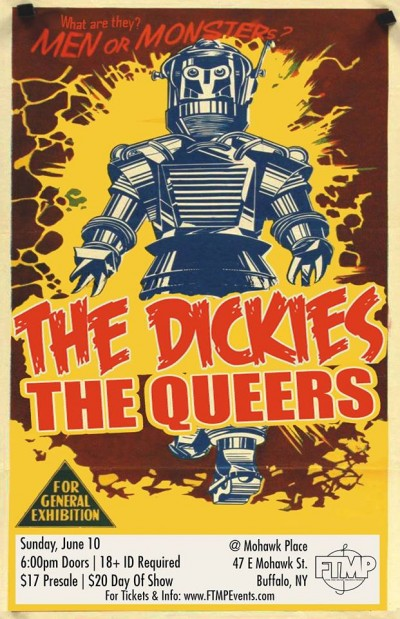 The Dickies (40th Anniversary Tour) & The Queers
w/ The Barksdales, Periodic Table of Elephants, & Tony Rocky Horror and The Rehabs

Forty years ago, a group of insolently sarcastic teenagers from the San Fernando Valley performed their first show at the Whisky. At a time when many of the early punks were competing to see who could be more violently self-destructive, The Dickies were refreshingly absurd, penning rudely silly yet terminally catchy odes to Barney Rubble, Marlon Brando, Caligula and Sammy Davis Jr. that were juxtaposed with oddly exhilarating, supersonic-paced remakes of ancient tunes by The Moody Blues, The Left Banke and Black Sabbath. Much like the narrator of “Tears of a Clown,” these cutups have often disguised their own tragic history of suicide and personal struggles with wickedly clownish behavior.

The Dickies were among the first punk rock bands to emerge from Los Angeles, and the first California punk band to be signed to a major record label and appear on network television. The Dickies' style was campy and humorous with obvious influences from the Ramones. They were extremely popular in the UK and had a top 10 hit with "Banana Splits (Tra La La Song)" in 1979; oddly enough, many of their lyrics were about aspects of Southern California life not easily decipherable to those unfamiliar with the region, in songs like "Waterslide", "I'm A Chollo", "Manny, Moe and Jack", and "(I'm Stuck in a Pagoda with) Tricia Toyota", which is about a local TV news anchorwoman. In 1988 they did the theme music for the cult classic movie Killer Klowns from Outer Space.

The Queers are a punk rock band from Portsmouth, New Hampshire, formed in 1982. Singer/Guitarist/Songwriter Joe King has been the principal member of the group, with a vast number of musicians cycling in and out of the band over the years. Supposedly, the band name 'Queers' was used simply to poke fun at what he called the "Art Fag" community in NH. That same brand of humor and inanity has become a staple of The Queers music, who have produced songs such as "Can't Stop Farting", "Born To Do Dishes", and "I Didn't Get Invited To The Prom" in their own Ramones-esque style. While some punk rock bands attempt to use their music to impart a social or political message, King has made it clear that The Queers exist simply to play punk rock for the fun of it.