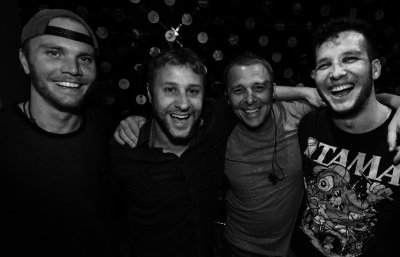 Spafford is an eclectic blend of driving rock, funk, dance and light. The result is something like Electro-Funk Therapy. Melting through genres while creating an illuminated mind-and mood altering experience night after night, Spafford is lighting up the southwest with their improvisational prowess and are paving the way for something new, yet familiar. It beckons to be seen, heard, and felt.

Since their first performance on New Years Eve of 2009, Spafford has built a following around the addictive live shows that they put on. The addition of Chuck Johnson as the band’s lighting director brought the final element to the already high energy environment being constructed. They have become a featured act for Vegas late-night spots, such as the Hard Rock Hotel and Casino and The Palms, and have hosted many of the official after-parties for bands like Further and Widespread Panic.

Spafford has toured throughout the Southwest and Northwest and shared the stage with bands such as Widespread Panic, Particle, EOTO, The Motet, and many more. In March of 2015, the band claimed it’s first ever main stage slot at the McDowell Mountain Music Festival in Phoenix, Arizona. Spafford continues to expand and extend their route to bring their experience to new places. 2015 also brought the release of a long-awaited live CD, “Live: Volume 1,” with tracks collected over 2 years of shows in cities such as Denver and Boulder in Colorado as well as many cities across the state of Arizona.

Connecting with fans is always the primary focus of all of Spafford’s endeavors and the boys understand the importance of embracing those who enjoy and connect with their music. A fan was recently quoted saying “Spafford is what this world needs…a combination of all genres to connect all walks of life.” Whether stopping to enjoy fresh local food, or making connections with new faces in new cities, Spafford continues to push forward with their goal of changing lives, one show at a time.