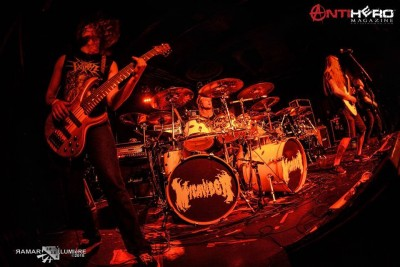 Parking allowed in Aldi's or the NFTA terminal
(Do not park near the donut shop, they will tow you)

Formed in 2007, right in the heart of the dreadful, frozen tundra surrounding Green Bay, Wisconsin, “Micawber” has been steadily building a name for themselves. While constructing their own style of modern age death metal and keeping the music fun, and interesting, Micawber has been rapidly gaining fans across the country. The band originally began as a 5-piece lineup consisting of Leighton Thompson, Sean Thompson, Jake Gamez, Jeff Plewa and Tyler Lachowicz. Later on parting ways with bassist Jake Gamez, long time friend and soul pummeling bassist Nick Gouin joined forces with the band and solidified the lineup. Recently the band had parted ways with long time vocalist Jeff Plewa, in return Leighton picked up the slack and began the journey as lead guitar and also frontman. This has been the strongest line up for the band and has been leveling venues in every city they have taken on!

This Minneapolis, MN death metal band brings one hell of a sound. Their musical style brings dark and twisting riffs that leads to progressive and heavy breakdowns. Vocals that bring a darkness to your ears that just make any death metal enthusiast bang their head in appreciation for that talent. The lyrics are not for the faint of heart either describing gruesome acts of violence against mankind and pillaging large amounts of body parts from people for experiments which includes but are limited to probing, cutting, extracting, and dissecting. which is not unfamiliar with the genre.