Lonestar Sailing, The Big Lonesome and Brendan and the Strangest Ways
Thursday 10th May, 2018 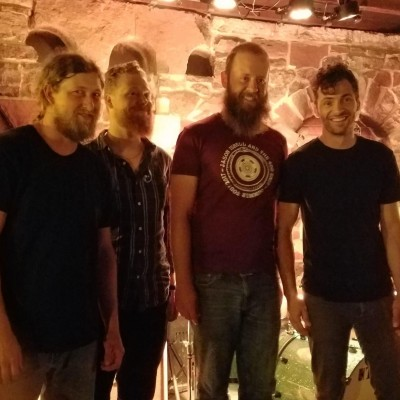 Lonestar Sailing, The Big Lonesome and Brendan and the Strangest Ways live in The 9th Ward

Lonestar Sailing is a band out of Buffalo, NY with Nate Campese (drums), Matt Swanekamp (guitar), and the brothers Charles (guitar & vocals) and Phil Dusel (bass). It got started as a solo project for Charles in 2014 and quickly grew to a four member band the following year.

They released their first self titled album in 2014 (recorded and performed by Charles in a home studio) and just finished recording a 5 song EP (recorded at California Road Studios) to be released independently in August 2017.

Originally started as a solo project by Chad Gosselin (guitar/vocals) in 2009, Boston band The Big Lonesome has grown over the years to become a four piece tapestry of shoegazey indie rock with a sensibility for pop. Gosselin’s story driven lyrics explore a wide range of topics from the wonder and confusion of running into an old fling while buying kale at the supermarket (“What the Hell Am I Supposed to Do?”) to attending the final show at iconic T.T. the Bear’s Place in Cambridge, MA before it closed in 2015 (“Everytown, USA”). Brother Luke Gosselin (guitar/lap steel/vocals), Sam Okon (bass) and Rob DeSousa (drums/percussion) join Chad to perform music that has been described as “The Rolling Stones covering Sonic Youth” and has drawn comparisons to Guided by Voices and early Wilco.

Brendan and the Strangest Ways

Brendan & the Strangest Ways is the moniker adopted by songwriter Brendan Shea to create music for the roving spirit. His songs are heartfelt reflections on the loves and losses experienced over countless miles traveled in a search for something that always feels just a little out of reach.

Brendan’s peers have called him a true songwriter’s songwriter who expertly crafts his lyrics like a mason building a brick wall, and whose haunting melodies and compositions have a way of outlasting durations of quiet to stay stuck in your head long after you’ve heard the last note.