JOHNNY and the GEM TONES - History of Rock and Roll
Saturday 14th May, 2016 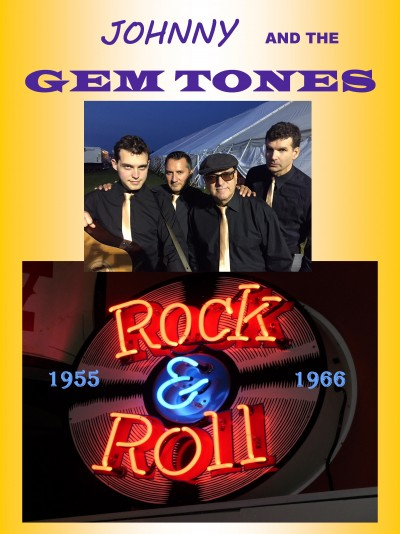 JOHNNY and the GEM TONES brings back to life every major hit, from every major artist, from the Rock 'n' Roll era of the 50s and 60s. They are a 5 piece band with an array of concerts behind them collectively performing for 30 years on the theater stage as well as fairs and exhibitions. You'll hear hits by Elvis, Chuck Berry, Little Richard, Jerry Lee Lewis, Fats Domino, Bo Diddley and Bill Haley and the Comets! Also included are the Rockabilly classics by Eddie Cochrane, Gene Vincent and Buddy Holly. The Doo Wop era with groups like The Diamonds, The Del Vikings and Dion and the Belmonts! Into the 1960s with The Beatles, The Rolling Stones, Herman's Hermits, The Animals, Gerry and the Pacemakers and many others from the British Invasion! And also including American Pop artists like the Beach Boys, The Young Rascals and the Motown and Soul sound of The Four Tops, The Temptations, Marvin Gaye and Smokey Robinson and the Miracles! JOHNNY and the GEM TONES are fast becoming one of the most sought after nostalgia groups which brings fun and life back to the Rock and Roll stage. Rock and Roll is Here to Stay!