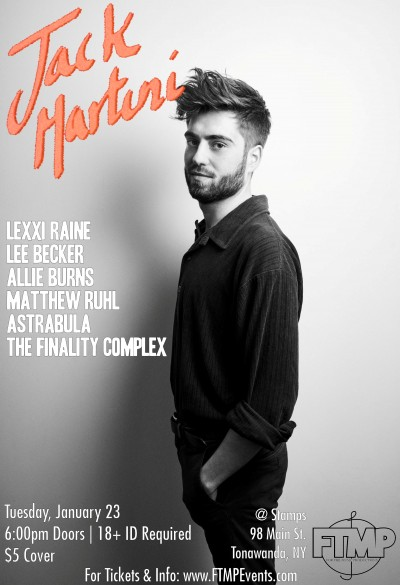 Fresh off of his performance at Governors Ball, frontman, composer and songwriter Jack Martini cooks up his pop songs with hints of hip-hop, humour, 60's rock and composes with flavors from all over the world.

Growing up in New York City around family friend, studio musician and singer Mark Pender, Jack was brought up in a mix of showmanship, professionalism and musical talent.
At the age of thirteen, Martini started writing comical lyrics with his father, who had moved to Paris, France. A satiric aura that still remains in the spirit of Jack Martini's songs.

Moving to Rome, Jack had the honor to work with producer Marco Patrignani at the famous Forum Music Village. As he assisted notorious film composers his passion for writing for media sparked.

In 2014, he received multiple scholarships to study at Berklee College of Music where he focused on composition and arranging, in particular writing for film, TV and adds. Under the guidance of award winning composers Bill Elliott, Eric Reasoner and Renato Milone, he juggled between pop music, with collaborations with Brian Wheat (TESLA) and composition for media.
​
With features on The Boston Globe, PopCrush and Culture Collide, Martini works as a producer and composer on an array of projects and continues to build his following in New York and Boston, with performances of his EPs D.R.Y. and Marmalade Love at Governor's Ball, Sofar Sounds, Arlene’s Grocery and Rockwood Music Hall’s main stage 2.