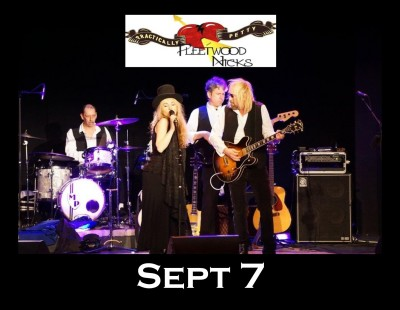 Exploring material from Rumours to Stevie's solo work to Tom Petty/Stevie Nicks hits as well. This is not a clone band but you will have a hard time telling this because of the likeness between Anna & Stevie. Fleetwood Nicks portrays Fleetwood Mac and Stevie Nicks with an incredible authenticity. Backed by seasoned professionals, it is definitely a show you will not want to miss.

Tom Petty Tribute Band, Practically Petty have been mesmerizing audiences throughout Canada since forming in the Fall of 2009.

Every performance is true to the spirit and essence of Tom Petty and the Heartbreakers. The Tom Petty look and sound. The group also pride themselves on utilizing the same equipment as the Heartbreakers just so as not to leave any stone unturned. their extensive song catalog includes all of Petty's hits with the Heartbreakers as well as his solo work and other side projects like The Traveling Wilburys. If you love Tom Petty heartbreakers Practically Petty is the show