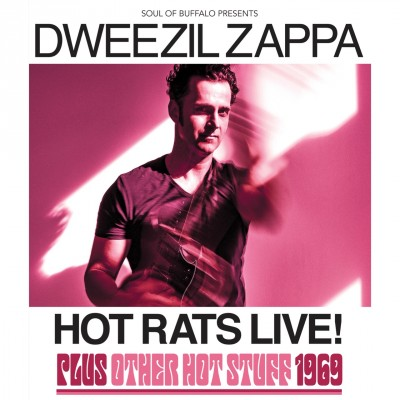 Dweezil Zappa and his six-piece “rocking teenage combo” will perform his father’s entire Hot Rats album as part of the fall 2019 tour. The album played a pivotal role in establishing Frank Zappa as a composer and guitarist and was dedicated to Dweezil upon its release in 1969. The 50-year-old classic will be surrounded by an assortment of other psychedelic, avant-garde odd-metered toe tappers well known to Zappa aficionados, and Dweezil’s performance in Buffalo will be exactly one day before his own 50th birthday. Since 2006, Dweezil and his band have performed the pioneering music of Frank Zappa well over 1,000 times.

Dweezil Zappa was born on September 5, 1969 in Los Angeles, the son of Frank and Gail Zappa. It was inevitable that his life would be filled wall-to wall with music, his father having listed his religion as “musician” on Dweezil’s birth certificate.

At 6 years old he received his first guitar, a Fender Music Master from Frank. Dweezil would occasionally make noises with the guitar by plugging it in to a little Pignose amplifier. By age 12 Dweezil was exposed to new sounds on the radio. Besides his father’s music, he began listening to: The Beatles, Queen, AC/DC, Led Zeppelin, Black Sabbath, The Who and Jimi Hendrix. And like many aspiring guitarists of his generation, Dweezil’s ear was caught in a stranglehold by the trailblazing guitar styles of Edward Van Halen and Randy Rhoads.

He listened to their records for hours on end trying to figure out a way to translate what he was hearing in his head to his fingers at the other end of the guitar. Along the way, he had opportunities to ask his dad for some help. “I remember asking Frank to help me figure out the song ‘Revelation/Mother Earth’ from Blizzard of Oz. I really didn’t know anything about chords and in that song Randy Rhoads was using classical music elements that were really new to rock guitar at the time. Frank helped me learn the finger picking intro.”

Dweezil was also fortunate to have great assistance from one of the musicians in his father’s band at that time, Steve Vai. Dweezil became remarkably proficient in a very short time due to his intense practicing sessions, which continue to this day. “Steve made a notebook, which I still have, of scales and exercises and I practiced the stuff at least 5 hours a day.”

Dweezil’s first ever studio recording was produced by Eddie Van Halen under the pseudonym of De Vards in 1984. Shortly after Dweezil began performing on his father’s recordings. In the 35 years since then he has collaborated with a musical Who’s Who of several generations, including: Herbie Hancock, Terry Bozzio, The Fat Boys, Nuno Bettencourt , Gary Cherone and Pat Badger of Extreme, guitarists Warren DeMartini, Steve Lukather and Zakk Wylde, jazz legends Mike Stern and Lee Ritenour, plus Frank Zappa sidemen Mike Keneally and Scott Thunes.

The first version of Dweezil’s new live band Zappa Plays Zappa debuted in 2006 to big audiences of crazed Zappa fans. The earliest ZPZ tour included Frank alumni Steve Vai on guitar, Napoleon Murphy Brock on tenor sax and lead vocals, and Terry Bozzio on drums. This lineup was captured in the group’s first release on CD and DVD in 2008, which netted Dweezil his first Grammy Award for Best Instrumental Performance for its version of the Frank Zappa classic “Peaches En Regalia,” which originally appeared on Hot Rats.

2015 marked the release of Dweezil’s first album of new original material in 10 years with Via Zammata. Fusing analog tape and tube guitar amps alongside surprising instruments such as fretless guitar and the oud, Zappa drew listeners into his intimate and multifarious musical world. Armed with unexpected vocal arrangements, like the Beach Boys procreated with the Bulgarian Women’s Choir, this collection of 12 uniquely orchestrated songs represented a true metamorphosis for Dweezil the solo artist.

The first leg of the HOT RATS LIVE! World wide tour includes 25 shows, primarily in the northeastern United States. Buffalo is the second stop on the tour. Don’t miss it!