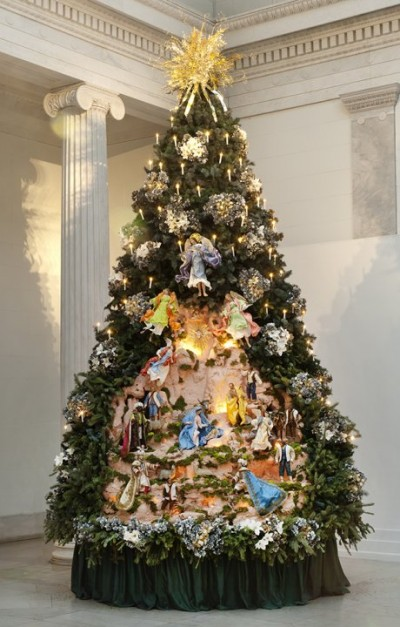 It's the official lighting of the Albright-Knox’s traditional Christmas Tree and a concert of holiday favorites by the Buffalo Gay Men's Chorus under the direction of Artistic Director Garrett F. Martin and Associate Artistic Director Dr. Abigail Rockwood-Puehn. AK Café will host a reception following the lighting and concert.

New this year, the tree will be on view in the Albright-Knox’s Auditorium. It features our 18th-century Neapolitan Crèche, given in memory of Helen Northrup Knox by her close friend the late Mrs. Howell H. Howard. The creche represents a dramatic Nativity scene with sequential narrative episodes. The figurines' faces express vivid emotions and their poses include emphatic gestures. The setting for the Crèche simulates the steep rock of the Neapolitan coastal area, reminiscent of 13th- and 14th-century Italian paintings.

This set of Crèche figurines is one of only three in the United States, with the other two in the collections of the Metropolitan Museum of Art in New York and the White House. During the Kennedy and Johnson administrations, the White House set was a focal point of the holiday display in the East Room. There are 33 figurines in each set, with the largest ranging from 15 to 20 inches high. These figurines were made exclusively in Naples, Italy, during the 100-year period between 1730 and 1830.