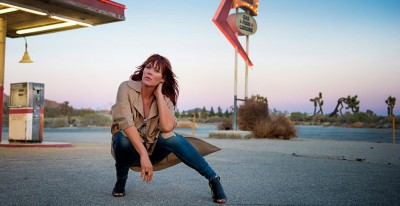 The Center for the Arts

Beth Hart is on fire. Right now, the Grammy-nominated singer/songwriter is riding a creative tidal wave, firing out acclaimed albums, hooking up with the biggest names in music and rocking the house each night with that celebrated burnt-honey voice. Beth's latest album, Fire On The Floor was released on February 3rd. (Provogue/Mascot Label Group).

The Blues Magazine once dubbed Beth Hart "the ultimate female rock star", and there's no doubt that her two-decade career is the ultimate thrill-ride. Born in Los Angeles, she released several hit albums through the '90s, then reignited in the post-millennium as both a solo artist and the head-turning vocalist for guitar heroes like Joe Bonamassa, Jeff Beck, Buddy Guy and Slash. "Extraordinary, "wrote The Times of her once-a- generation voice box, while The Guardian praised her "daring, brooding and angry" performances. It's no wonder she's been nominated for three Blues Music Awards.

But it's in recent times that Beth has truly blossomed. In April 2015, she released Better Than Home: a critical and commercial smash that topped the iTunes Blues Chart and was crowned #4 "Best Blues Album Of The Year" by Mojo magazine.

Already a star in Europe, the U.S. has embraced her too, packing venues in major cities and receiving a nomination from the American Blues Foundation in the category of "Contemporary Blues Female Artist." "It's unbelievable," she admits. "This last tour, we were playing much bigger houses than I'd ever played in the States - and they were sold-out."

But maybe her greatest live performance to date was seen by millions of television viewers, when her tribute to Buddy Guy on the Kennedy Center Honors special received one of the only two standing ovations of the evening.