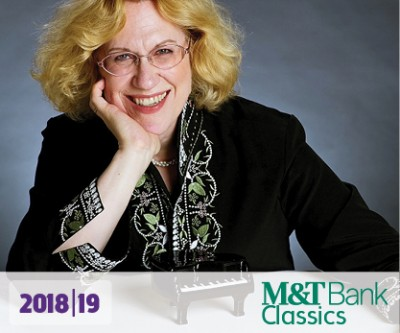 These classical treasures provide a great segue to the holiday season as we welcome our neighbor to the south, Chautauqua Symphony Orchestra Music Director Rossen Milanov, to the podium. Saturday - Come at 7 PM to hear directly from the artists in “Musically Speaking,” sponsored by Uniland Development. Sunday - Come at 1:30 PM for “Musically Speaking,” sponsored by Uniland Development.

BEETHOVEN Piano Concerto No. 3
SCHUBERT Symphony No. 9, “The Great”

In 2017, the Mr. Milanov was recipient of an Arts Prize by The Columbus Foundation for presenting Beethoven’s Ninth Symphony as part of Symphony’s 2017 Picnic with the Pops summer series.

Mr. Milanov has established himself as a conductor with considerable national and international presence.  He has appeared with the Colorado, Detroit, Indianapolis, Milwaukee, Baltimore, Seattle, Fort Worth, Symphonies, and National Symphony Orchestra at the Kennedy Center, Link Up education projects with Carnegie Hall with the Orchestra of St. Luke’s and Civic Orchestra in Chicago.

Mr. Milanov has collaborated with some of the world’s preeminent artists, including Yo-Yo Ma, Itzhak Perlman, Joshua Bell, Midori, Christian Tetzlaff, and André Watts. During his eleven-year tenure with The Philadelphia Orchestra, Milanov conducted more than 200 performances. In 2015, he completed 15-years tenure as Music Director of the nationally recognized training orchestra Symphony in C in New Jersey and in 2013 a 17-years tenure with the New Symphony Orchestra in his native city of Sofia, Bulgaria. His passion for new music has resulted in numerous world premieres of works by composers such as Derek Bermel, Richard Danielpour, Nicolas Maw, and Gabriel Prokofiev, among others.

Rossen Milanov studied conducting at the Curtis Institute of Music and the Juilliard School, where he received the Bruno Walter Memorial Scholarship.

A passionate chef, he often dedicates his culinary talents to various charities.

Noted for her musical command, cosmopolitan artistry, and visionary independence, Sara Davis Buechner is one of the most original concert pianists of our time.

Ms. Buechner has performed in every state and province of North America — as recitalist, chamber musician and soloist with top orchestras like the New York Philharmonic, San Francisco Symphony and Philadelphia Orchestra; and in venues such as Carnegie Hall, the Kennedy Center and the Hollywood Bowl. She has toured throughout Latin and South America and Europe; and she enjoys a special following in Asia, where she has been a featured soloist with the Sydney Symphony, New Zealand Philharmonic, New Japan Philharmonic and Shanghai Philharmonic, among many others.

Ms. Buechner has released numerous acclaimed recordings of rare piano music by composers such as Rudolf Friml (“a revelation” — The New York Times), Dana Suesse, Joseph Lamb, Joaquín Turina, Miklós Rózsa, and Ferruccio Busoni (including the world première recording of the Bach-
Busoni “Goldberg” Variations). Stereophile magazine selected her Gershwin CD as “Recording of the Month,” and her interpretation of Hollywood Piano Concertos won Germany’s coveted Deutsches Schauplatten Preis. Most recently her recorded traversal of the score to Carl Dreiser’s silent movie classic Master of the House (1925) may be heard on Criterion Collection DVD.

Sara Davis Buechner joined the faculty of Temple University’s Boyer College of Music and Dance in 2016, after previously teaching at the Manhattan School of Music, New York University and the University of British Columbia. She has presented masterclasses and workshops at major pedagogic venues worldwide, adjudicated important international piano competitions, and is also a contributing editor for Dover Publications International. In 2017 Ms. Buechner marked her 30th year as a dedicated Yamaha Artist.

As a proud transgender woman, Ms. Buechner also appears as a speaker and performer at important LGBTQ events, and has contributed interviews and articles about her own experience to numerous media outlets. Sara is a dual American-Canadian citizen who makes her home in Philadelphia.