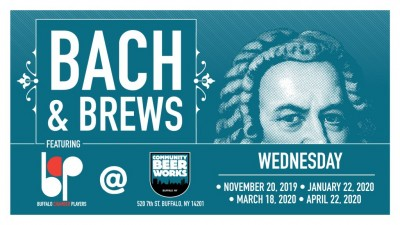 The Buffalo Chamber Players and Community Beer Works announce Bach & Brews, a collaborative concert series pairing music and beers at CBW’s 7th Street brewery and taproom. The series is modeled after concerts held in the early 18th century by Johann Sebastian Bach at Café Zimmermann in Leipzig, a bustling cultural and culinary establishment that saw the premiere of many of Bach’s secular works.

Bach & Brews presents music by Bach and other Baroque masters along with more contemporary works. Audiences can experience these musical masterpieces in a relaxed, fun atmosphere while enjoying great food, drinks, and camaraderie.

Music starts at 7 pm and continues for about 2 hours. Bach & Brews is open to the public, with an optional suggested donation of $15 at the door which includes a complimentary beer or wine. Community Beer Works offers a wide selection of drinks and food for your enjoyment during the evening.

As Buffalo’s preeminent chamber music ensemble, the Buffalo Chamber Players presents innovative music programs performed by our region’s finest musicians. The ensemble’s mission is to challenge, redefine and enhance the public’s perception of chamber music while promoting the city of Buffalo as an inspiring place to live, work, and play.