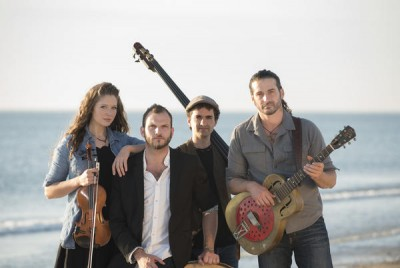 It’s difficult to impart the roots-steeped, road-trippin’ essence of the Adam Ezra Group into a single word, but frontman Adam Ezra nonetheless keeps one in mind as something of a mantra: community.

To the musicians at the heart of AEG, community is epitomized by a belief they all share, one that has long doubled as a mission statement for the group: namely, that making music together is itself a form of grassroots organizing, capable of nothing less than changing the world.

That Ezra and his bandmates hold sacred such an inclusive approach to their craft helps explain the gathering storm of an album that is “Hurricane Wind,” one of AEG’s most ambitious undertakings to date. Not only fan-funded, but also fan-produced, the project found the broader AEG fan community playing a role in every step of the process from inception to its release on May 21st 2017.

Such a groundbreaking form of collaboration makes all the sense in the world for a musical collective like AEG. After all, as Ezra sees it, the fans are really part of the band, active members of their movement who’ve always exercised a critical role in AEG’s ability to carry out its mission. This inclusive approach to musicianship, centered about respecting and celebrating their listeners above all else, Ezra insists, is what has allowed the group to explode out of their Boston-area origins to emerge as one of the most uniquely powerful, relentlessly entertaining live-music experiences in the country.

AEG’s grassroots efforts recently caught the eye of John Oates, of Hall & Oates fame. For the past year and a half, Ezra and Oates have been regular writing partners, meeting up in Nashville between tours. Three of their co-writes are featured on the upcoming Adam Ezra Group album, and Oates himself joined Ezra in the studio to sing and play on the album. They performed their first co-written song, “All I Am”, live in-studio as an acoustic duet, a process also shared with fans, who were invited along for a virtual tour of the studio as well as granted access to unreleased studio performances.

Last December, AEG galvanized their community partnership by releasing 23 studio demos to fans, including multiple collaborations with Oates. Ezra established an innovative framework through which fans could follow the process of song arrangement and studio tracking, help whittle the album down to just 11 polished final cuts, steer artwork creation, and assist in naming the project itself.

The now-released album, “Hurricane Wind,” speaks to an elemental, overpowering force of nature, a quality AEG believes exists in every human being and can be magnified through the unifying power of music.

When the record arrived on May 21, the AEG fanbase turned the full power of its collective hurricane wind outward, and shared the music for free with over 5000 people over the course of two weeks. Such a groundswell of activity wouldn’t have been possible even a few years ago; “Hurricane Wind,” to AEG, represents both a celebration and reaffirmation of how remarkably that community has grown.

Even amid ballooning success, Ezra says it’s been not just easy, but natural for AEG to stay dedicated to its mission and true to its humble roots. Perhaps no song sums this up more than a fan favorite, selected to anchor the new album. Called “I Believe,” it’s a gorgeously layered, nakedly emotional ode to the long path they’ve already traveled as a community – and to the wide-open road ahead.

You’ve got a style, that comes on like a hurricane wind,” sings Ezra on the track, backed by a group of musicians all equally engrossed in the material and attuned to its significance.

“You’ve got a spark, that lights the fire that never ends.” With his next lines, Ezra speaks not only to the internal maxim that keeps him moving, but also to the enduring force for hope and change that his band has come to symbolize to its ever-swelling fanbase: “And in the times when hope is gone, you give me the strength to carry on – I know the path is long, but I believe.”