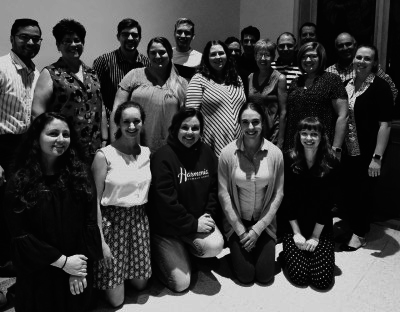 Oh to be in England. Or Scotland Or Ireland.

Tickets are $15 and are available online at www.harmoniacs.org or at the door one hour before each performance.

The program will feature choral works from some classic British composers including Ralph Vaughan Williams, Orlando Gibbons, and John Lennon and Paul McCartney. (yes, that Lennon and McCartney) .

“One of my fondest memories from Harmonia's early years was our performance of the Swingle Singers' arrangement of ‘When I'm Sixty-Four,’ which we are bringing back for the upcoming concerts’ says Robert Pacillo, Harmonia founder and executive director. “It's fun, playful, catchy, well-written, and it embodies the eclectic nature of Harmonia's stylistic palette; we can go from Byrd to the Beatles and everything in between, all in one program. Just like Gibbons, Byrd, Stanford, and Rutter, Lennon and McCartney have earned a place among the greatest of the British composers, and over the next several hundred years, we will still be singing their music.

Weiser will also play John Rutter’s Birthday Madricals for piano and double bass which were composed for jazz pianist George Shearing. Michael Zogaib, a scholarship student at the Cleveland Institute of Music, will play double bass on these pieces.

A British Choral Tapestry is sponsored by Unicell Buffalo and Pacillo’s Fitness Gear.

Pianist Nick Weiser is steeped in both the jazz and classical idioms and has performed at events as far reaching as the Umbria Jazz Festival in Perugia, Italy, and Switzerland’s Montreux Jazz Festival. During his formative years in western Kansas, Weiser studied piano with the late jazz pianist, composer, and arranger Frank Mantooth before matriculating to the University of Kansas. There, he developed his classical background while maintaining an active involvement in the jazz and musical theater programs, winning the prestigious Dick Wright Jazz Award in 2006 and performing with such greats as Peter Erskine, Ingrid Jensen, Rich Perry, John Abercrombie, and Gary Foster, to name a few.

He received his Bachelor of Music degree with highest distinction in 2008 before attending the Eastman School of Music in Rochester, New York, where he earned both his MM and DMA in Jazz & Contemporary Media. At Eastman, he studied with artists Harold Danko and Bill Dobbins, and was a member of the Downbeat Award-winning Eastman New Jazz Ensemble. Weiser is the Director of Jazz Studies at SUNY Fredonia and has given lectures and masterclasses at universities and institutions nationwide.

A native of Hamburg, NY, Michael Zogaib began playing the double bass at the age of 8 and was mostly self-taught until the age of 12 when he began to study privately with William Staebell.  In 2014 and 2015, Michael was the recipient of the Philip and Janice Levin Foundation Scholarship to attend the Luzerne Music Center. Michael then went on to study with Brett Shurtliffe of the Buffalo Philharmonic Orchestra.  As a winner of the Greater Buffalo Youth Orchestra Concerto Competition in December of 2016, Michael performed Giovanni Bottesini’s Concerto No. 2 with the orchestra. In 2017, he was the winner of the Fredonia Bass Fest Competition.  In the Summer of 2018, he attended le Domaine Forget Music Academy in Quebec where he performed in masterclasses for Paul Ellison and Francois Rabbath as well as studying with David Allen Moore, Nicholas Walker, Scott Dixon, and Etienne Lafrance. Michael has also performed in masterclasses for bassists Joseph Conyers and Jeffrey Turner. Currently, Michael is currently a second year scholarship student at the Cleveland Institute of Music where he studies under Cleveland Orchestra member Scott Dixon. He was recently awarded a full fellowship to attend the Aspen Music Festival for the summer of 2019.