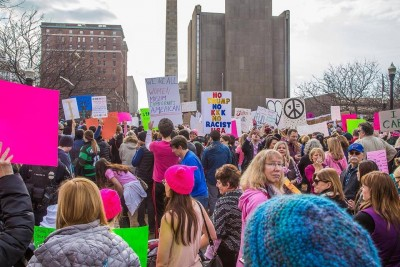 March in downtown Buffalo; Part of WNY #StillResisting Weekend - #wepersist; #PowertothePolls; #womensmarch2018 - on the one year anniversary of the record-breaking Women's March!! Starting at Buffalo City Hall Steps, we'll walk (& keep moving) to spots relating to current campaigns such as the Convention for the Elimination of all Discrimination Against Women (CEDAW); Voter Registration; Better Policing; the Poor People's Campaign; Resist Militarism; and much more. See Route below, and Co-sponsors and speakers at top/pinned post.

And don't forget to check out http://wnypeace.org/wp/events/ for our Sat 1/20 #StillResisting bus (7am-6pm, from UBSo Park & Ride; $34) to Women's March in Seneca Falls (WMinSF) the previous day; we'll be at the Heart of the Women's Mvmt during the 100-year anniv of women's right to vote. Contact mmilligan@tutorialsolutions w/your name, email, phone#. Reservations & pymt needed in advance.

Come out in Solidarity with the Women's March on the one year anniversary of the biggest worldwide protest in history!! #WePersist!! #PowertothePolls

Our stellar Speakers will highlight related campaigns at each spot - very briefly. They will be listed in the pinned post below, right after our strong and spectacular cosponsors! Si, se puede!

We'll have Truth and Love to keep us warm (plus we'll keep moving!) See you there! We Shall Overcome!