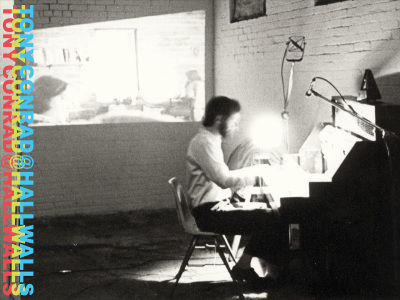 Culled from nearly 40 years of Hallwalls' still and video archives (1977–2014), this exhibition will serve as a prelude to Introducing Tony Conrad, the upcoming retrospective at the UB Art Gallery and Albright Knox Art Gallery, by showcasing a selection of performances and still imagery documenting Conrad's decades-long association with Hallwalls. Performances will be looped and presented in the gallery alongside a photo montage of Conrad at Hallwalls. This exhibition is rare and unusual for Hallwalls, which more typically exhibits new works made by living artists directly for the gallery. But Conrad's history with Hallwalls stretches back to its earliest years and continued over five successive decades. The digitization and cataloguing of Hallwalls' archives—all of our archives, not merely those that include Conrad—has been a decade-long project that still continues and it is with great honor, reverence, and remembrance that Tony Conrad is the first subject of an exhibition derived entirely from those archives. Open in both spirit and presentation, Tony Conrad @ Hallwalls strives to be an evocative point of entry into the wider survey premiering in February at UB Art Gallery and in March at the Albright Knox Art Gallery before eventually traveling to ICA Philadelphia and MIT's List Visual Arts Center in Cambridge, Mass.

With a “talkformance” by Anthony Billoni