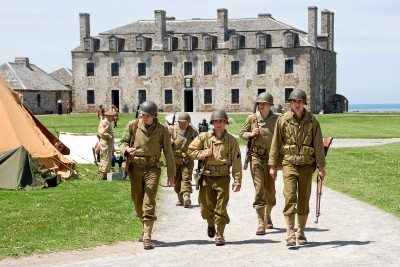 Join us for a trip through 300 years of military history. Special displays of military vehicles, period camps from the 18th, 19th and 20th centuries, weapons demonstrations, uniform programs and hands-on activities for families. In commemoration of the centennial of the Battle of Cantigny in World War One, a special program will also be presented in the Fort Niagara Officers Club.

Schedule of Activities (both days)

In the Officers' Club:

10 a.m. to 4:30 p.m. The Battle of Cantigny Program: commemorating the centennial of this first important victory for U.S. forces during WWI

1:00 p.m. Military Uniforms and Weapons of the Flintlock Era

2:00 p.m. Military Uniforms and Weapons of the 19th Century

3:00 p.m. Military Uniforms and Weapons of the 20th Century.