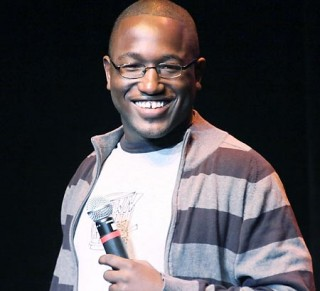 He's appeared on the Late Late Show with Craig Ferguson, Comics Unleashed with Byron Allen, and Comedy Central's Live at Gotham. He'll also be appearing in the upcoming documentary 'The Awkward Kings of Comedy. He isn't really awkward though. Sometimes he is. 'If Steven Wright, Mos Def and Dave Chappelle had a baby, that would be disgusting, but it would sound like Hannibal Buress. The funniest young comic I've seen in years.' - Chris Rock

'Hannibal is incredibly funny with a smart, unique style and I am proud to be his father.' - Jim Gaffigan

'I haven't heard this album, and I never will. But I've seen Hannibal do comedy, and if the CD is a recording of him doing comedy, then it's probably worth getting. I mean, I still won't get it, but you can. And you might like it.' - Todd Barry

'Hannibal is funny on stage and off stage and right in between, too.' -Demetri Martin

'One of the best joke writers I've ever seen. He's one of the few performers I've come across that creates such electricity in a room that I think 'this guy is going to be a star FOR SURE.' -Mike Birbiglia, star of What I Should Have Said Was Nothing and author of Sleepwalk With Me and Other Painfully True Stories