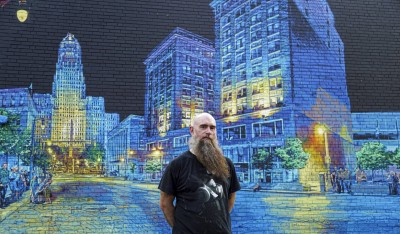 Please join us for the premiere of Underbelly (2018), a documentary film from the executive producer of the critically acclaimed Netflix documentary Saving Banksy (2014). Underbelly chronicles one of the most legendary street art galleries in the world—one that only the artists invited to participate ever saw, until now. From 2008 to 2010, 103 artists were taken deep into the New York City subway system to a long-forgotten terminal by project heads Jordan Seiler and recent Public Art Initiative muralist Logan Hicks. Working only by portable lights in the dead of night, some of the most preeminent names in street art created large-scale works. Once discovered, the project drew immediate attention from authorities, causing the site to be permanently sealed and all documentation to be kept hidden—until the statute of limitations ran out for all involved. Interviews in the film include artists Ron English, Shepard Fairey, Swoon, and many more.

Immediately following the screening, Logan Hicks will be on hand to discuss the project. Hicks will be releasing two prints from his recently completed mural, Walking Back Time, an AK Public Art mural at 5 East Huron Street in Buffalo. One print is a hand-created spray-painted edition of twenty-five, and the other is a signed open-edition giclée print.