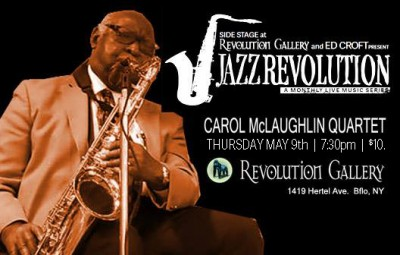 Our Jazz Revolution Series continues this month with an exciting performance by the Carol McLaughlin Quartet! In his native Jamaica, saxophonist, flautist and arranger Carol McLaughlin started recording in the 1950s backing Laurel Aitken. of The Vagabonds band. He played sessions in the 1960s and 1970s at Federal, Studio One, Treasure Isle and at other studios. He recorded with Don Drummond ("Just Cool"), Tommy McCook ("Mr. Solo"), Lester Sterling ("Inez"), and Rolando Alphonso ("You Can Depend On Me") of the Skatalites.

He also recorded the soundtrack to the film "Smile Orange" with Melba Liston in 1975.

Since relocating to Buffalo in the 1970s, McLaughlin has been a staple of the Buffalo jazz scene, performing at venues such as The Anchor Bar, and Historic Colored Musicians Club, where he leads a 17 piece big band.

The Quartet will feature Carol on Sax and Flute, along with Ed Croft on Bass, Andrew Nixon on piano, and Al Hury on drums. This will be the first time the quartet plays the Side Stage at Revolution Gallery and promises to be a stellar evening of music and art.

Enjoy a glass of wine, craft beer or house specialty cocktail before and during the performance.  Limited seating.