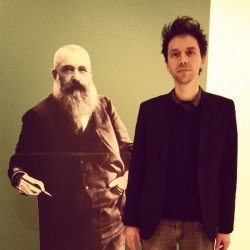 Jesse Mank is a Buffalo-born visual artist and multi-instrumentalist who has been stealthily producing esoteric art-pop under the nom de plume Hussalonia since 1997. After two years as a fine arts major at the University at Buffalo, he transferred to Buffalo State College where he earned a BS in secondary English education and an MA in English, going on to teach high school English in Buffalo for eight years. An avid reader and record collector, Jesse resides with his wife, author/poet Janet McNally, and his three young daughters.


Here's the short version: I just paid $30 to see a man in a mask play a two-hour guitar solo against a pre-recorded backing track. And I did the exact same thing two days earlier, in Cleveland. Both shows were sold out. I'd do… more »


I wear my Record Theatre T-shirt often, not just because I am a lifelong Record Theatre shopper, but because it proudly proclaims “Est. 1976.” That happens to be the year I was born. When I was a kid, my Dad used… more »

Exhibit Review: Shape of a Pocket at Squeaky Wheel


It’s in times of social unrest that art reveals its most essential power — the power to question and provoke in ways that words fail us. Art spaces become agents for public discourse, bringing people together… more »