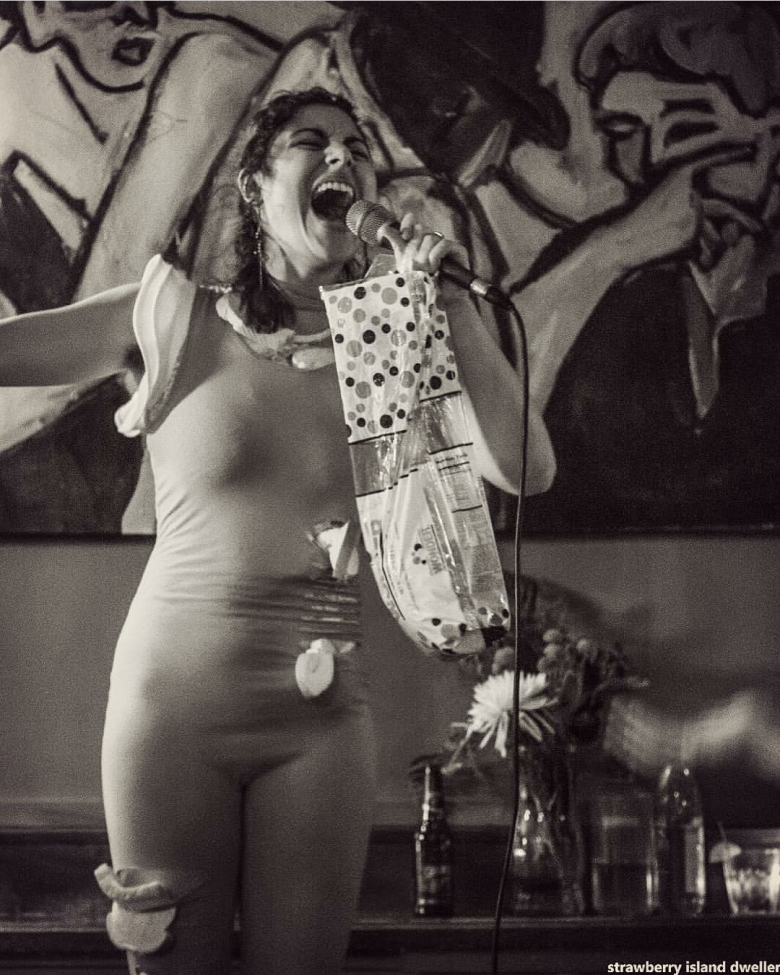 A classically-trained multi-instrumentalist. A graduate of the Eastman School of Music. The lead singer of the award-winning hip-hop jazz-fusion group Radarada. A Buffalo Public School orchestra teacher. She’s Ana Vafai, better known as Little Cake, and, well, there she is on YouTube repeatedly yelling, “I smell fish” over a trashy lo-fi punk jam.

What makes Ana Vafai a compelling artist is that she is a master of the tension between cerebral introspection and abject buffoonery. She’s a perceptive observer of humanity who’s not afraid to make a fool of herself for art’s sake. For instance, there’s a YouTube video of her performing her song “There’s Your Mind” backed by a six-piece ensemble that includes a cello and violin. She sings, “You don’t have to worry about those little things that seem absurd, like you’re using your words, but they’re melting away. Oh, you’re on display, and now your brain waves go arggggghhh!” at which point she falls to the ground and writhes around. In her song “Relationships” she repeatedly — straightfaced — sings about “a man who knows how to remove stains.” She’s been gifted with a voice that is equally at home with jazz and R&B as it is with musical theatre, and yet she’s not afraid to make her voice ugly, often shout-singing and making exaggerated vocalizations for dramatic effect. It’s bold and refreshing — honest in a manner that most artists, burdened by inhibition, are incapable of.

“I grew up watching musicals and going to productions,” Vafai reflects. “My dad’s a filmmaker and film teacher. My mom’s a music teacher. So between teaching, film and musical theater, I have become very familiar with how someone should behave on stage if they want to get people’s attention, especially when there’s music’s involved — what kind of faces people make on stage, and what tone of voice they have to make sure that the audience is captive. It’s showbiz that I’ve been addicted to my whole life, all the different types of it, even dancing, which I studied as a kid. And it all plays into this wonderful sense of stage presence that… you can’t nail it unless you are familiar with all these different forms.”

Little Cake is so very clearly more than a band or even a musical act. So what is it exactly? “Little Cake is me,” Vafai explains. “Me as a character, as a starlet… I don’t like to be thought of as only a musician because I do so much talking on stage and emoting that it’s more than just music. It’s also theatre and performance art.” Her deft use of humor and theatrics are intended to deflect from the sincerity and seriousness of her subject matter, which makes it all the more palatable and inviting. “I like to hint at the problems and intricacies of the world by entering these different characters and portraying myself in extreme ways, just to make light of all the different ways people can be and all the different opinions that can exist.” She describes herself as having a “heartfelt, earnest, honest personality” which “can come across as being sarcastic or even rude, when really I’m just saying the truth as loudly as I can, and the truth is usually something very positive and loving.” And while there are silly or brash qualities to her personae, they are often offset by the musical detail of her compositions, a sophistication and musical intelligence that can only come from years of classical training. Laugh all you like, but Little Cake is an artist to be taken seriously.

Little Cake has one proper album, Fixin’ You Up, which was recorded live with Steak and Cake’s Brandon Schlia, but to get a fuller picture of Vafai’s brilliance, visit her Soundcloud page, which features eclectic and intricately layered home recordings of shrewd compositions brimming with an irresistible nervous energy and impressive musicianship. Then there’s the hilariously oddball lo-fi work she’s released with anti-folk rapper Jack Topht (see: “I Smell Fish). It stands in stark contrast with the refined, jazz-infused singing she does with Radarada (who opened for T-Pain last spring and was named 2016's "best local music act" by Buffalo Spree), but that’s exactly what makes her an artist worth watching. Vafai is unpredictable, and like so many great artists, maybe even a little dangerous. She is currently working on the next Little Cake album, in which she will play most of the instruments herself.

Born and raised in Buffalo, Ana Vafai loves the city and vows to stay. “Building community and friendship is as important a part of my life as music is, and they definitely affect each other. Buffalo is a very welcoming place to produce and create. It’s a melting pot of music and art — and appreciators of the two.” She says that the forthright nature of Buffalonians make them “very supportive and incredibly encouraging. There’s just something about Buffalonians that make them want to say it out loud to you, so you know it’s true.”

Little Cake will be performing at Sugar City’s Non-Denominational Xmas Eve Eve Show on Saturday, December 23rd. The show is all-ages and starts at 7PM with a $7 cover. Vafai will be accompanied by Katie Weissman on cello and Brianna Battista on vocals. Also on the bill that evening will be Matthew Danger Lippman (NYC, slacker glam soul), Hussalonia (Buffalo, experimental pop), and Ex-Pat (Buffalo, dream pop).