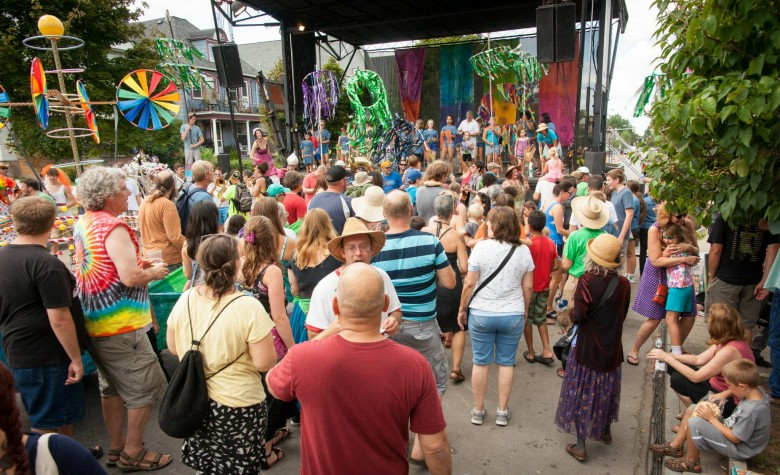 As the summer season draws to a close the WNY music scene is coming alive this weekend with festivals, concerts and performances from local and national talent on stages all across region. Our top picks this weekend: Nightlights Music Festival, Babefest and Elmwood Village Festival of the Arts.

From Thursday through Sunday, The Night Lights Music Festival will once again transform the beautiful grounds at The Great Blue Heron in Sherman, NY into a living breathing work of art and audio-visual experience. The festival offers three nights of pristine camping with over 30 musical acts on multiple stages, art installations, hiking and biking on over 200 acres of land, swimming, KAN JAM tournament, yoga sessions, a vendor village and late night DJ sets for the all-night movers.

Now in it's 6th year, Nightlights has proven itself to be one of the highlights of the festival season with a large and loyal following in Buffalo and beyond Western New York. The lineups have consistently been stellar, including local favorites like Aqueous and Funktional Flow to the Grammy Award winning Snarky Puppy who took to the stage at the 2014 event. This year, the organizers have put together an exciting roster of performers with a few standouts that I'm excited to see!

On the Public Stage look out for local rockers The Tins, Pine Fever with their distinct Americana sound, as well as a host of other upcoming acts selected by the great crew over at The Public. Main stage must-see acts for me include the 2-piece London Souls that have been recently making a splash in the NYC scene; West Coast experimental band Beats Antique - guaranteed to deliver a hard-hitting performance colored with theatrics, live art and miscellaneous awesomeness; and Lazlo Hollyfeld - performs Radiohead as the last band on Saturday night (if I make it all the way through!)

Looking at the current weather forecast I expect festival-goers to have an enjoyable weekend, camping, frollicking and vibing in the beautiful outdoors - these are the memories that give us hope in the winter months!

In a year of political turmoil and a highly consequential election season, Buffalo native and singer-songwriter-activist Ani DiFranco is bringing the inaugural BabeFest event home to Asbury Hall on Friday evening. This year’s BabeFest theme has been announced to be "VOTE DAMMIT", and Ani will be joined by The Daily Show co-creator/Lady Parts Justice founder Lizz Winstead and artist/advocate Chastity Brown. A portion of the proceeds will go to The Roots of Music, which empowers the youth of New Orleans through music education, and to Lady Parts Justice.

341 Delaware Avenue Buffalo, NY 14202
A festival of music, comedy and social activism in Babeville, Righteous Babe’s stronghold in Buffalo. This year’s BabeFest focus will be VOTE DAMMIT, and Ani will be joined by The Daily Show…

On Saturday and Sunday, the Elmwood Avenue Festival of the Arts will bring over 170 craftspeople and artists to Elmwood Village creating a unique shopping experience for visitors to the 17th annual celebration of community. Additionally over 50 performances on 3 stages, local food vendors and a cultural row with over 30 regional organizations will make for a fun-fulled and engaging weekend for the entire family.

Elmwood Avenue Festival of the Arts

Between West Ferry and Saint James Steet Buffalo, NY
Elmwood Avenue isn't just a street, it's a celebration! Two days to browse the work of more than 170 artists and craftspeople selling work done in 16 different mediums. You’re sure to find…
- Share this page -