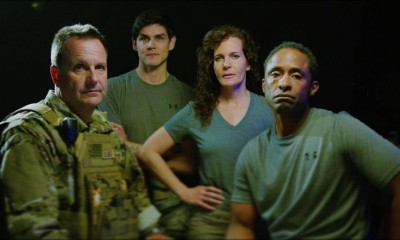 Army Green Beret Danny Patton is a modern-day warrior fighting battles that range from tribal Afghanistan to his own living room. As the corrosive gears of war begin to rip apart his family, his integrity, and his soul, Danny is thrust into his final, eternal mission. On the other side, with Valhalla beckoning, he discovers that combat can be fueled by vengeance or by love… it just depends which price you are willing to pay. You’ve heard the war stories of the “first in.” This is the untold story of the LAST OUT.

Written by Ret. Lt. Col. Scott Mann, LAST OUT is based on true stories of modern war told from a downrange and home-front perspective, performed with an all veteran and veteran-family cast and musical score. LAST OUT is a theatrical experience intended to help civilians better understand the cost of combat to our veterans and their families, and to help warriors utilize the power of story to let go of their pain, healing the wounds of war.

LAST OUT is produced by The Heroes Journey, a 501c3 nonprofit founded by Ret. Lt. Col. Scott Mann and his wife, Monty Mann, dedicated to helping our military men and women find their voice and tell their story in transition with free books, workshops, and virtual training. These free resources will be made available to veterans in each city LAST OUT stops in throughout the tour.

For more information on LAST OUT, including cast bios, trailers, and tour information, visit www.lastoutplay.com.