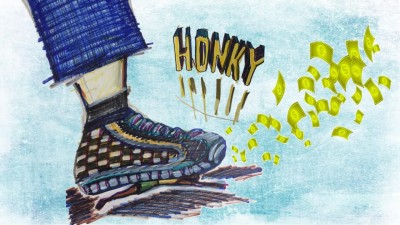 The regional premiere of HONKY by Greg Kalleres. This 2013 nothing-is-sacred satire takes us into a corporate world that proudly boasts about its commitment to equality... but when a black teen in the 'hood is killed over a pair of sneakers, profits shoot through the roof for the privilege elite. The white president of the shoe company is drooling over the marketing possibilities, but the black shoe designer and the white director of his shoe commercial are racked with guilt.  They turn to a black woman therapist who has them popping pills in no time.  Add in two angry black youths, the whitest girl on the planet, and some drug-induced hallucinations of Frederick Douglass and Abraham Lincoln and you've got the ingredients for an explosive subversive comedy with a message that's needed all too seriously in our prejudiced world.

Sometimes you gotta laugh at just how bigoted America really is and this play has the guts to do it.  It's a deliriously irreverent black comedy that jeers at the sheer lunacy of the racism and exploitation that swirl around us every day... it will get howling with laughter at the rest of the world... but don't be too surprised if you end up laughing at yourself.