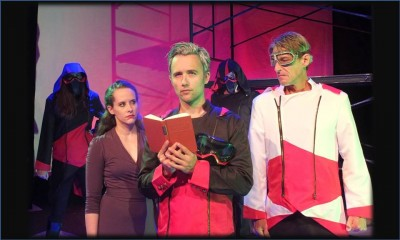 Subversive Theatre turns up the heat with FAHRENHEIT 451! To kick off our 16th season of radical theater we are excited to unveil this rarely-produced stage adaptation of one of the great anti-authoritarian novels of all time as part of Curtain Up 2018.

FAHRENHEIT 451 takes us into a sinister future where firemen are called upon to light fires instead of extinguish them. And what do they burn? The true enemy of any totalitarian state: books, of course. But one unsuspecting fireman is about to discover that there’s much more to life than what the well-ordered regime spoon feeds the populace… and join a bizarre resistance faction where rebels defend their beloved books in the most surreal of ways...

A fierce rallying cry for the power of individual will and the written word, this dystopian classic seems frighteningly prophetic in our Twenty-First Century world where books are fast disappearing and anti-intellectualism spreads like wildfire.

Adapted by Ray Bradbury himself, this unrelenting odyssey offers an urgent wake up that will bring audiences to their knees and then to their feet. Our rendition – directed by renowned local author Gary Earl Ross* and Michael Doben* – promises a dizzying assault on the senses with an intense array of light, sound, costume, and video to conjure up the enveloping futuristic setting where power and spectacle have replaced the last vestiges of human decency and freedom of thought.

FAHRENHEIT 451 runs September 6th – October 6th with performances Thursdays, Fridays, and Saturdays at 7:30. All performances are in our home venue, The Manny Fried Playhouse at 255 Great Arrow Avenue on the third floor of North Buffalo’s historic Great Arrow Building.

Tickets are $30 general admission or $25 for students, seniors, and Subversive Theatre members.