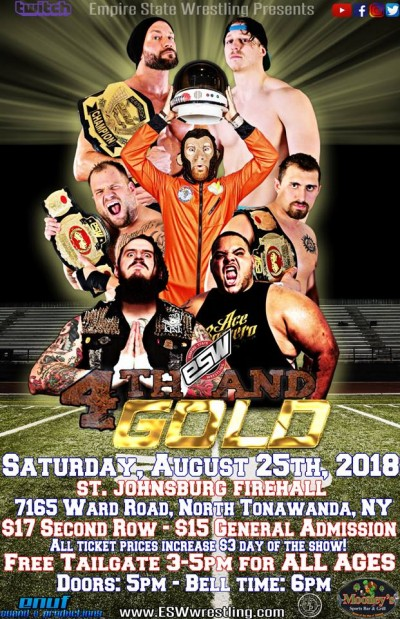 Empire State Wrestling (ESW) will return to the St. Johnsburg Fire Hall, at 7165 Ward Road, North Tonawanda, NY on Saturday, August 25 for "4th and Gold". This event will be preceded by ESW's first ever tailgate party in the St. Johnsburg's parking lot from 3 p.m. to 5 p.m. Admission to the tailgate is free of charge. Food and drink proceeds will go toward St. Johnsburg Fire Company. It will also feature games, a dunk tank, plus wrestler appearances and autographs. Front row and second row tickets are sold out for the wrestling portion of the event. General admission tickets are still available. Tickets can be ordered at eswwrestling.com before the day of the event for $15 and save $3 off the door price of $18. Doors open at 5:00 p.m. and the action starts at 6:00 p.m.

The following wrestlers are scheduled to appear at "4th and Gold":