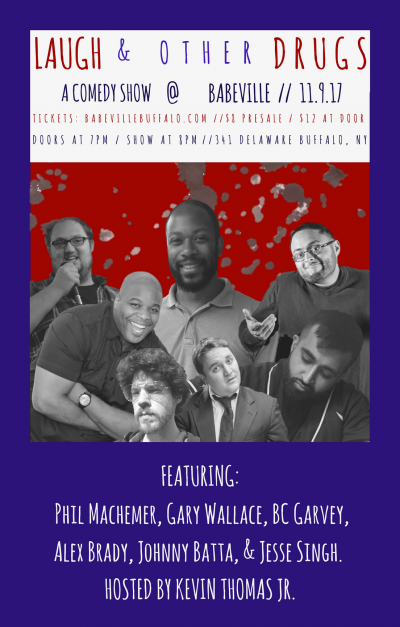 “Laugh and Other Drugs” at The 9th Ward at Babeville

“Laugh and Other Drugs” began over a year ago to showcase some of the area’s funniest comedians in the perfect local venue for stand-up comedy: The 9th Ward.  This show brings some of the best comedic talent from Buffalo and surrounding areas for a night of laughter.

Johnny Batta: up and coming Toronto comic; performed on Comedy at the Carlson competition in Rochester.

Alex Brady: local teacher and comic who has performed on Goodbar, Gypsy, Nietzsche’s, and Helium’s showcases.

BC Garvey: hosts a monthly showcase at Gypsy Parlor; my secret crush

Jesse Singh: Runner up in “Prove You’re a Comic” contest at Absolute Comedy in Toronto; performed on a show at Just for Laughs Comedy Festival