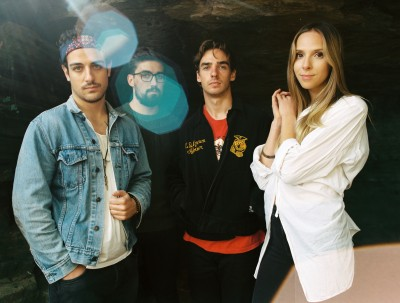 The inviting harmonies of Wild Rivers provide a shimmering texture to the band’s new EP, Eighty-Eight .However, dedicated fans know about the depth of Wild Rivers – from the alluring melodies that take unexpected turns to the undercurrent of emotion in their tightly-crafted lyrics.
Wild Rivers is composed of Khalid Yassein (vocals, guitar), Devan Glover (vocals), Ben Labenski
(drums) and Andrew Oliver (guitar, bass). Over three years, the Toronto-based band has accrued more than 25 million streams on Spotify, toured consistently across the U.S. and Canada, and earned a reputation as a band that makes a powerful connection with listeners.

Leading up to the EP, the band members went into a basement studio for a month to flesh out songs and ideas, make demos, and rehearse. With their creativity at its peak, the band then headed to Nashville for a week of collaborations. The teamwork there paid off with two more songs, rounding out the five-song EP. “A Week Ago,” a glistening pop song about the inevitable entanglement of romance and the road, opens Eighty-Eight . Propelled by Glover’s vulnerable vocal and the strum of an acoustic guitar, “Howlin’” conveys the challenges of chasing dreams, while “Call It a Night” follows an intimate relationship that’s unraveling.

The tasteful musicianship of Oliver and Labenksi underscores the drama of “You Can Side”
and the empowering “I Won’t Be Back” practically begs for a singalong.
“All the music that I truly love has really strong, purposeful melodies,” Yassein says. “I think it’s so
beautiful and intriguing when everything in a piece of music works to service the singular melody, the sonic choices, arrangement, chords, and vibe come together to set the stage for the tune of the song to shine. To me it’s kind of an old school idea that still rings true. If the melody isn’t great, there’s no amount of dressing that can really take the song to that special place.”

That careful craftsmanship is apparent in the band’s 2016 self-titled debut album, as well as their 2017 single, “Do Right.” By keeping Eighty-Eight mostly acoustic, the band can bring the intimacy of the studio to listening rooms, theaters and festival stages across North America.
Glover and Yassein first forged a musical relationship while attending college. As their live performances started causing ripples on the local scene, they abandoned their career paths in psychology and biology, respectively, to pursue their creative ambitions. Known early on as Devan & Khalid, the lineup grew to encompass Labenski, who then suggested bringing Oliver into the fold.
The band collectively says, “While we converge on many of our favorite artists and genres, each band member has a slightly different musical taste. We think this benefits us, as it allows us to draw from different inspirations during the creative process, and bring forth ideas that can combine to become a unique sound. Andrew grew up listening to hip-hop, Ben is into indie music, Khalid is inspired by many classic singer-songwriters, and Devan is drawn to lots of pop and R&B.”

However, all four members find inspiration in the iconic pop artists of the 1970s, such as Fleetwood Mac, James Taylor, and Neil Young. The band adds, “We have a hard time describing our sound, as it does not fall into a typical categorization of any genre. We recently decided that we needed to come up with a solid elevator pitch, and landed on ‘Folk ‘n’ Roll & Country Soul.’ It’s kind of a cop-out from choosing one… but we think it fits!”