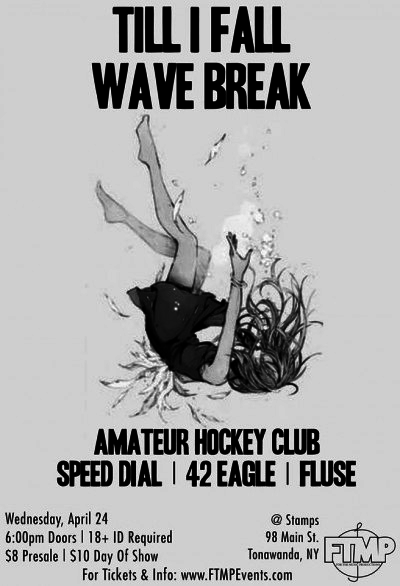 With the resistance of a punk band plus a healthy dose of angst, pop-punk duo Till I Fall lay their minds bare on their self-titled EP. Singer Brandon Leland and lead guitarist Zax Aliva circle between ruminations on the current state of American society and unsettled relationships. The EP looks as much outward as it does inward, all while remaining true to a pop-punk sound. Bridging between the personal and political, Till I Fall offers relevant and relatable themes while sticking to a pop-punk sound that any fan of Warped Tour would be sure to enjoy.

Wave Break is an alternative rock band based in Central New Jersey consisting of Kelly Barber (lead vocals/rhythm guitar) Derek Hona (lead guitar), Bailey Hand (drums), and Chris Santos (bass). Founded in 2017 by Barber while residing in Boston, the new lineup came to be after the release of their debut EP Armory in August 2018.

Since their inception, the band has opened for artists such as Oh, Weatherly (Hopeless Records) and Centerfolds (CI Records), been featured on the Undiscovered Sound, and featured in many press articles and Spotify playlists. Their second single "Plaster City," an anthem about standing up for yourself, released in February 2018 and was immediately added to regular rotation on idobi Radio and later to the Alternative Press Discover playlist on Spotify. The music video for the song premiered on New Noise Magazine and quickly garnered over 2K views. The band then supported their debut EP with a short run of headlining shows across the northeast.

The band’s lyrical content centralizes on the theme of standing up to societal or social barriers. Elements of post-hardcore, pop punk and emo rock come together for a unique sound on their debut, but the band plans to expand on that for their followup release. They currently are writing new material and aiming to release a new single in 2019.