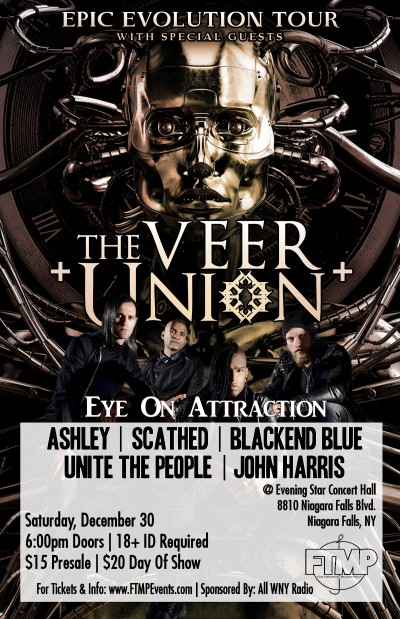 10 Years of Overcoming Adversity - THE VEER UNION is BACK with their 6th studio album "DECADE". 2016 marks the 10 year span between The Veer Unions' first album "Time To Break The Spell" released in 2006 and their brand NEW release appropriately titled "DECADE". This is the first full length album release since their 2012 release "Divide The Blackened Sky". This marks 10 years of THE VEER UNION and their struggles of overcoming adversity.

Crispin began his journey singing, songwriting and producing songs for "The Veer Union" as a solo project in 2001, at this time the project was called "Everything After". Crispin wrote and produced over 15 demos in 2001 before the first incarnation of the band which later would come to be known as "The Veer Union". Two of those demos from 2001 "Watch You Lose" & "Make Believe" got Tommy Lees' attention from Motley Crue and in 2005 were used on Tommy Lee's solo record "TommyLand".

Crispin felt that the new album DECADE seemed like the perfect opportunity to take these two songs along with 3 other songs which were written before the first incarnation of The Veer Union 10 years ago, and bring them back to life. 5 BRAND NEW songs were also written for this new album bridging the span of over a DECADE proving that THE VEER UNION can stand the test of time.

One other demo was called "Seasons" which would later become the leadoff single to their major label release titled "Against The Grain" on Universal Records. "Seasons" went Top 10 in the USA and Canada and #32 on Billboard's Top Heat Seekers Chart, as well as used by WWE, MLB and Nascar and many more. 3 years later "The Veer Union" released "Divide The Blackened Sky" with the leadoff single "Bitter End" which went #1 on Sirius Xm Octane and was used by the NHL Pittsburg Penguins Stanley Cup theme song.

Crispin has struggled with depression over the years. Despite his internal battle he continues to persevere through life and his musical journey, which is what the leadoff single lyrically signifies titled, "Defying Gravity". THE VEER UNION is excited about releasing the NEW album "DECADE" which is self produced by Crispin.

It has taken "The Veer Union" 4 years to rebuild and form a NEW UNION with NEW members Ryan Ramsdell on Rhythm Guitars, Dan Sittler on Lead Guitar/Vocal Harmonies, Touring Drummer Tyler Reimer and Amal Wijayanayake on Bass Guitar/Scream Vocals. The Veer Union is now ready to take 2017 by storm with the help of their new labels Pavement Entertainment and Rock Shop Entertainment and longtime friend and manager Erik Baker from Streetsmart Management.