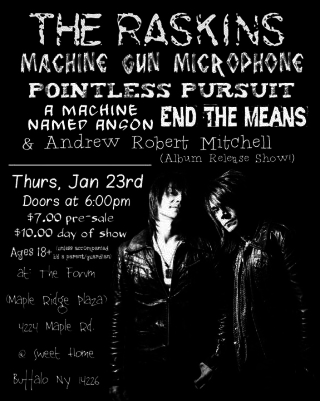 Logan and Roger, born and raised in New York City. Tommy Raskin, their father, known for his great achievements on the Broadway Stage staring in West Side Story as “Tony”, Oklahoma, South Pacific, Damm Yankees, and Guys and Dolls. Performing with Americas finest, Judy Garland, Barbara Streisand and many others. Judy Lee, their mother, Jazz Great, herald the powerful voice captured with her beauty sending chills through your spin, worked with jazz greats Sara Vaughn, Billy Holiday and others to became one of the premiere jazz singers of her time. Logan and Roger spent extended periods of time on the road with their parents going to shows while slowly honing their craft. The boys would learn all their parents sheet music filled with the big show tunes. Rehearsing with the Orchestras and performing live with their parents planted the seeds of their life’s course in music. Living together on the Lower East side of Manhattan, The Raskins would compose tremendous amounts of music, which would reflect their influences from life’s experiences. There European travels brought the world beats mixed with the life in the Big Apple, New York’s American Way, creating Pop and Rock songs reflecting the likes of, early Beatles, The Rolling Stones, Jim Croche, Simon and Garfunkel, to the Ramones, Blondie, Iggy Pop etc. The Raskins performed and honed their craft in the clubs of New York City, The Bowery Ballroom, Mercury Lounge, and The Bitter End (just to name a few.) Perfecting their relationship with their audience. Relocating to Los Angeles, The Raskins have worked with Movie Director, Music Producer and Engineer greats such as, Ron Howard, Cameron Crowe, Greg Ladanyi, Gavin Mckillop, Duane Baron, and Phil Ramone just to name a few. Thus helping set the standard for the Raskins and continuing on this wonderful musical journey and allowing the world to enjoy all our music.

Rock/Grunge/Reggae from Grand Island, NY. "We're mainly in a spaceship recording music and bustin' rhymes, but sometimes we like to come to earth and show people what true Rock n' Roll is all about."

Andrew Robert Mitchell is a Buffalo, NY based blues/folk singer and songwriter who crafts songs with soulful vocals and stylistic guitar riffs. Andrew has been playing music since he was 15 years old, writing songs on his dad's Gibson ES125. He is the main songwriter and front-man for the rock band Sixpin and is involved in several other recording and commercial music projects. "Run Me Outta Town" is a collection of gut-punching blues/folk anthems with influences ranging from Stevie Ray Vaughan to Tom Waits. The opening track "Don't Bother Me" showcases a Texas Blues feel, while "Roll Them Bones" brings the soul of the deep south. Each song on "Run Me Outta Town" has a unique sound, keeping the album fresh and interesting every time it comes on.

End The Means is an acoustic duo featuring hard rockers of Ritual Walk, Jeff Young on guitar/vocals, and Lelan Allen on vocals/guitar.