The Promise Hero, Sleepy Limbs (members of You, Me, and Everyone We Know), & Selfhelpme (of Valencia)
Saturday 28th Oct, 2017 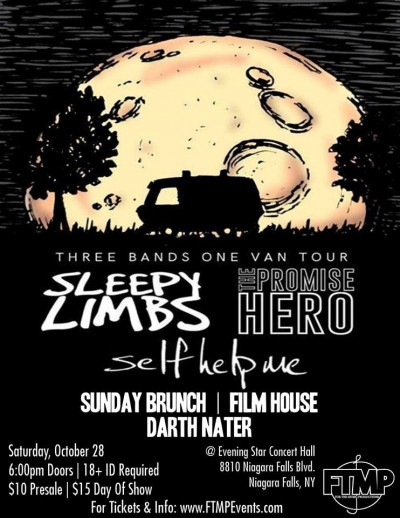 The Promise Hero, Sleepy Limbs (members of You, Me, and Everyone We Know), & Selfhelpme (of Valencia)
w/ Sunday Brunch - band, Film House, & Darth Nater

The Promise Hero is an American rock band located in Cleveland, OH and is the brainchild of Bobby Vaughn. The band was conceived in 2006 and instantly gained notoriety by demoing songs with Chris Conley from Saves The Day. Chicago-based TDR Records (Punchline, July, Barely Blind) signed the band and quickly thereafter The Promise Hero released ‘Wait For The Sun’ on October 28, 2008. The debut full-length was produced by Jamie Woolford (The Stereo, Animal Chin). Woolford also produced the band’s latest full-length, ‘Deja Vu’, which was released on August 13, 2013.

"After playing in a few other bands together (You, Me, and Everyone We Know, Bright and Early, and Ben Roth Band) we have arrived...at Sleepy Limbs. A musical project that liberates the melodies and whispers from our collective ether. Takes them out of our bodies, and into your brain, down your spine, and into your heart, to swim around like a half fish half flower, blooming in your soul with scales red and blue." Comprised of Ben Roth, Kory Gable, Joe Fuscia

selfhelpme is the indie-folk studio project from guitarist, JD Perry. He is currently supporting his latest album, "the road," out now on Know Hope Records.