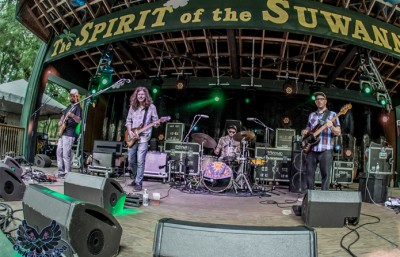 The Heavy Pets are an American rock band that blends rhythm & blues, jazz, funk, disco and reggae with rock & roll. Called “a living, breathing force of nature” by Relix Magazine, the Pets are known for their soulful songcraft and powerhouse live performances. Continuing the momentum of their current EP series, The Heavy Pets recorded and released Stolen Smile in the second half of 2014 amidst their rigorous tour schedule.

The group became an instant SiriusXM radio sensation in 2007 with the release of their double disc debut album, Whale. First embraced by the jam scene for their raw talent, their crossover sound that is showcased on their follow-up eponymous release propelled them into the periphery of mainstream music and landed the record on the Huffington Post’s “Top 10 Albums of 2010” list. Returning to their acoustic roots on Swim Out Past the Sun (2011), THP’s guitar duo set aside their electric axes for a more organic approach. The Pets followed up those polished efforts by releasing Everywhere Sessions: Volume 1 (2012), recorded live in the studio with accompanying videos. In 2013, The Heavy Pets launched an ongoing series of self-produced EPs- Two Horses and Rags and Aces, which have both received heavy airplay on satellite radio.

The Heavy Pets have taken the stage at Bonnaroo, Jam Cruise, High Sierra, Gathering of the Vibes, All Good, Wakarusa, Mountain Jam, Langerado, Bear Creek, Summer Camp, Catskill Chill, AURA and their namesake PetZoo, and performed with nearly all of the “who’s who” of the festival circuit and touring jam rock world. With a full tank of gas, wind in their sails, a new side project Beatles tribute show and a hot set of ’80’s covers to offer festivals, The Heavy Pets joined Hoplite in the beginning of 2016, ready to expand their touring base and turn on new fans everywhere.