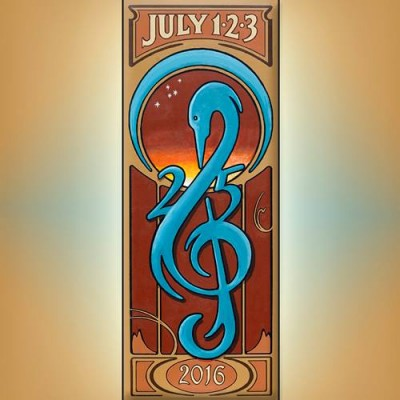 One of the longest-running roots music festivals in America turns 25! Jim Lauderdale and New Riders of the Purple Sage will join festival mainstay Donna the Buffalo and more than 30 other performers at the three-day event nestled in the rural, rolling hills of Chautauqua County, N.Y., from July 1-3.

Co-founders Julie Rockcastle and David Tidquist were asked to comment.

Ms. Rockcastle replied: "I realize how long we’ve been at this when fans introduce themselves and tell us they’ve been coming since they were a kid and they then introduce the child in their arms as a new blue heron fan! "

Tidquist added: "We've had some dramatic and inspiring musical moments up there. We've made many friends and created some beautiful memories. We're sure there's much more to come."

Up to 7,000 music fans each year revel in the Blue Heron’s easygoing, upbeat spirit. Fest goers build veritable tent communities beneath the trees and shuffle from stage to stage, including the dance tent where late-night zydeco keeps feet moving until morning dawns.

With intersecting forest trails, a Café in the Woods and a midway with assorted taste options – including organic fare – the Heron becomes a three-day mecca for fans to dip their toes into assorted musical waters: folk, bluegrass, country, rock, reggae, zydeco, electronic, funk, old-time string band and more.

A bevy of scheduled activities for children and teens make the Heron a popular place for families. The fest also features music workshops, dance lessons, and vendors with an array of items, such as clothing, hats, instruments, hammocks, jewelry and more. More than 500 dedicated volunteers keep the well-organized Heron running smoothly each year.

As the festival approaches their silver anniversary, the core principles of the event remain the same – to showcase a diverse blend of original music from national and regional performers, to create a magical space where festival-goers can interact with the artists and each other, and to foster a positive environment that ensures a safe and satisfying experience.