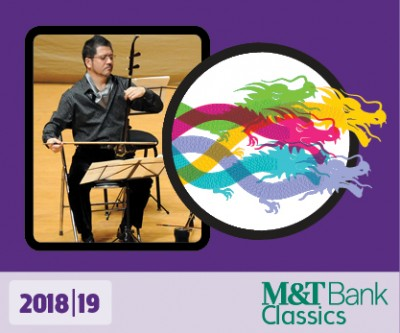 Usher in the Year of the Pig and celebrate the musical legacy of China! Xu Ke, called the “Paganini of the erhu world,” performs the beloved Butterfly Lovers Concerto, one of the most popular pieces of Chinese music ever written. With help from our friends at UB’s Confucius Institute, it’s sure to be a festive night! Come one hour early to hear directly from the artists in Musically Speaking, sponsored by Uniland Development.

Winner of the 2011 Memphis Symphony Orchestra’s International Conducting Competition and a featured conductor in the League of American Orchestra’s 2009 Bruno Walter National Conductors Preview with the Nashville Symphony, Maestro Lam made his US professional debut with the National Symphony Orchestra at the Kennedy Center in June 2008 as one of four conductors at the invitation of Leonard Slatkin. In recent seasons he has led performances with the symphony orchestras of Cincinnati, Baltimore, Detroit, Memphis, Illinois, Hawaii and Meridian, as well as the Hong Kong Sinfonietta, Hong Kong Philharmonic, Guiyang Symphony and the Taipei Symphony Orchestra.

Ken Lam studied conducting with Gustav Meier and Markand Thakar at Peabody Conservatory. David Zinman and Murry Sidlin at the American Academy of Conducting at Aspen and Leonard Slatkin at the National Conducting Institute. He read economics at St. John’s College, Cambridge University and was an attorney specializing in international finance for ten years before becoming a conductor.

Xu Ke received his Bachelor’s Degree in Music in 1982 with honors from the Central Conservatory of Music, Beijing, China, where he studied under the Erhu master Yusong Lan.

Xu Ke was the first Erhu in the China National Traditional Orchestra in 1983.  In 1986, Xu Ke conducted his first tour of the United States as the musical director of a Chinese Music delegation.

Xu Ke is also an outstanding composer of music for the Erhu, as well as an innovator with regard to how that instrument is played.  Xu Ke expanded the erhu’s range from two to more than four octaves, and has developed unique and innovative techniques such as double-stopping, artificial harmonics in high position and graduated prestissimo staccato.

In July, 2000, Xu Ke was invited as an art director by Yo-Yo Ma to participate in the Silk Road Project at the Tanglewood Music Center in Lenox, Massachusetts.  In October, 2000, Xu Ke conducted the debut performances of the ‘’Fiddle Suite’’ by Chen Yi, in Konzerthaus, Berlin, Herkulessaal, Munich and other major concert halls throughout Germany with the Singapore Symphony Orchestra in Oct. 2000.  In July, 2001, Xu Ke was the artistic director of the ‘’Silk Road Music’’ concert held during the 17th Tokyo Summer Festival in the Tokyo Opera City Concert Hall. The Sony Classics label released an album recorded during the Silk Road Project featuring Yo-Yo Ma, Xu Ke and an ensemble of other performers.  Xu Ke was the first Erhu master in the world to record on the RCA label.  He currently records for his own label, XUA, which stands for “Xu Arts”

He was awarded a platinum album from BMG Hong Kong in 1993.