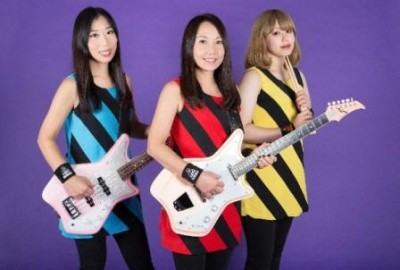 Bringing with them the candy-coated conductivity of unforgettable melodies, the incandescence of inestimable headbanging, the buoyancy of a brilliant display, and the potency of pure punk rock – SHONEN KNIFE are ALIVE! In The USA.

Boasting a nearly 40 year career, these three luminaries of rock & roll have wielded fun and food-centered bops that earned them the love and respect of music goliaths like Nirvana and Sonic Youth. They’ve made their way from their home of Osaka, Japan to the United States many times, but this year they’re putting their personal affection for each and every city on display. Following the release of their tenacious live DVD/CD ALIVE! In Osaka (Released on Robby Takac of THE GOO GOO DOLLS’ Good Charamel Records), Shonen Knife have prepared to deliver that same hometown energy from Buffalo on August 28th to Brooklyn on August 31st, Chicago on September 9th, Los Angeles on October 5th, and so much more. Each city will have its own personalized and limited edition artwork available at the show, because for Shonen Knife, home is where the fans are.

The Molice is a very active dance-core band from Tokyo, and now based in Buffalo, NY in the states.