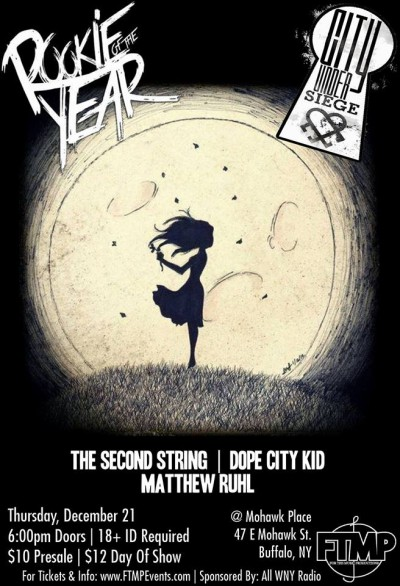 Rookie Of The Year : https://www.facebook.com/RookieoftheYear

Music is thoroughly entwined with our lives—organically spreading from person to person and city to city, leaving a trail of devotees in its wake. Singer-songwriter Ryan Dunson, who has played under the name Rookie of the Year since 2004, has embraced this fact, crisscrossing the country nearly a dozen times, winning hearts and developing a deeply personal connection with his fans.

THE MOST BEAUTIFUL is Rookie of the Year's new studio album and marks the shining moment in Dunson's evolution from acoustic-pop upstart to shimmering indie troubadour. Rookie of the Year began as a solo acoustic project, then evolved into a full band, and has been stripped down and rebuilt several times since, giving his audience a different perspective with each record and tour.

Dunson's packed tour schedule and willingness to play everywhere he can have enabled him to connect with fans of all ages. "At first, my audience was primarily teenagers, but now at shows I see younger fans all the way up to parents singing along with the music. It's really a cool atmosphere," he explains. "I'd like to think there's a universal element to my music where you never really have to grow out of Rookie of the Year."

Rookie of the Year has sold over 70,000 records in the last 5 years and songs have appeared on MTV's Laguna Beach and The Hills. Radio stations as far away as Indonesia have also fallen in love with "Frustrated" off of THE MOST BEAUTIFUL. With over 10 million plays on social networking sites and previous tours with Mutemath, LFO, Secondhand Serenade, and Gym Class Heroes, Rookie of the Year has earned a place as one of the hardest-working artists in today's music scene.

Known as one of the most Energetic, and contagiously catchy bands on a rock stage, Melodic.net has reviewed the band saying “there is something about City Under Siege that makes you feel good inside when you listen to them” and “their lyrics and songwriting are well beyond their years they are only going to get better as they experience more in their lives”

City Under Siege has an extensive tour history and a solid reputation backing them. They have shared the stage and have supported major music Nationals such as The Rocket Summer, the Spill Canvas, Hit The Lights, Quietdrive, Lights, Sick puppies, The White Tie affair, and many more. City Under Siege is a determined hard working independent band that will always earn and show respect within the industry and push to get noticed on a national level.