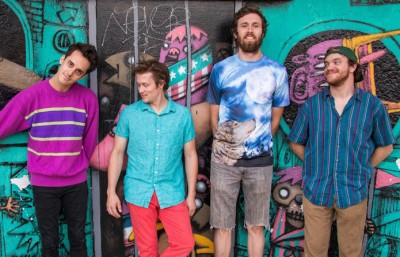 Mungion
After forming in Spring of 2015, Mungion has been working relentlessly to get their music out into the world. Based out of Chicago Illinois, this boundless quartet takes pride in their ability to explore crafty songwriting and live improvisations.

The band is Constantly going into uncharted territory and experimenting on stage Mungion keeps their shows fresh time and time again. Their calculated compositional prowess mixed with their ability to improvise together has made them stand out from the herd. Determined to always keep pushing the boundaries Mungion is always looking ahead.

Cold Lazarus
Cold Lazarus was officially formed at the beginning of 2017, when established Jamestown musicians Adam Gould (guitar), Gavin Paterniti (bass) and Marc Scapelitte (drums) decided to try something a little new and different from their previous and current original projects. The three met for their first practice in December, 2016 and found an instant chemistry and propensity for song-crafting that resulted in the creation of nearly a dozen original songs over the course of a few short months. This process was expedited through the acquisition of Drew Minton, who, along with Scapelitte, is a former member of the Porcelain Busdrivers, and who elevated the group’s originals to a whole new level with his melodic keys, synth and sax playing. The group hit the studio in February to record its first EP, “All Alone,” a four-track representation of the band’s diversity in its songwriting, which was released at the end of that month.

The group began stringing together live appearances beginning in April, finally introducing audiences to the songs that had been developing in private in the months prior. The music reflects a variety of styles and influences, inspired primarily by diverse musical backgrounds of Gould and Scapelitte. Centering around a back drop of funk-oriented groove rock, the band also incorporates elements of reggae, electronica, trance and straight rock into its set. Having been paired with Jamestown favorites Smackdab on a handful of occasions, and through the support of Smackdab’s members, Cold Lazarus has begun to establish a niche for itself among area music lovers who harbor an appreciation for funk, reggae and groove rock.