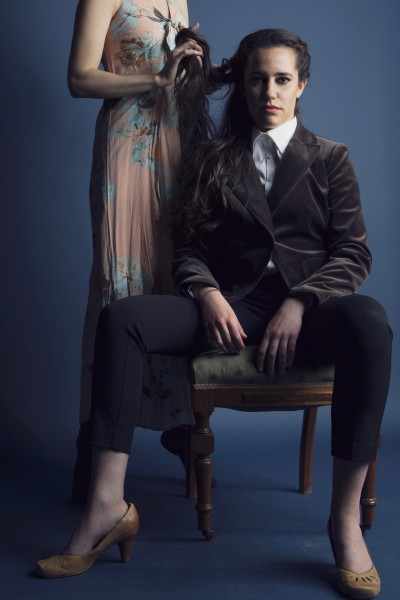 ABOUT JEAN ROHE
Jean Rohe writes one-of-a-kind narrative songs, concerned as much with the internal world as with the external. Her latest record as a bandleader, Sisterly, produced by longtime collaborator Liam Robinson, is a collection of songs about communication and missed connections, and tackles topics from love, lust, and longing to prisons, police violence, and migration.

She is perhaps best known for her much-covered 2012 video single, “National Anthem: Arise! Arise!” an aspirational alternative national anthem performed with choir and brass ensemble. Her award-winning 2013 release Jean Rohe & The End of the World Show was hailed by an Elmore Magazine reviewer as “enchanting” and “remarkable in so many ways I can think of no comparison.”

Jean tours regularly with Robinson & Rohe, her rootsy songwriting duo with Liam Robinson, and continues work on a performance memoir, The Odysseus Agreement, for which she’s received fellowships from the MacDowell Colony, the Johnny Mercer Songwriters Project, and others. She lives in Brooklyn, NY.

PRESS QUOTES:
“remarkable in so many ways I can think of no comparison” Elmore Magazine

“Not only does she make astoundingly beautiful music but she is thoughtful, reflective, and courageous.” No Depression

“a unique musical voice that sounds like a love song for a world imperiled.” Albany Times Union

SISTERLY
The cover of songwriter Jean Rohe’s latest record, Sisterly, is an imposing portrait of the writer as her hair is braided by another woman. “Braiding someone’s hair is so intimate and loving, also kind of servile, and at the same time it’s this complex power dynamic,” she reflects. “I mean, you literally have control over someone’s head.”

Like the portrait, Sisterly’s ten narrative songs illustrate and complicate traditional notions of power and intimacy, and in doing so, explore the very nature of how we communicate with each other.
The title song dwells on the words unsaid and deeds undone as a witness to a violent incident beneath a street lamp. But it goes one step further, blowing open the particulars of this single instance and shining a brighter light of responsibility on a society obsessed with domination and coercion. “Now, a song is a leaky paper cup; it can’t hold it all / thought I should call the police, but then I thought again,” she tells us, as she considers the possibility that a 911 call could ignite further violence. “Life can go by in a blur. Slowing down to write, to sing–it might be the only way I learn. There’s time to find the right language, but not only that: the right ink and paper, the right envelope or bottle, I can even audition the carrier pigeons. It’s a place where I can let the world be complex and disturbing and find my footing amidst that disorder.”

Rohe is probably best known for her much-covered 2012 video single, “National Anthem: Arise! Arise!” performed with community choir and brass ensemble. “I’ve always written about the world outside myself–’politics,’ as some would have it. For a long time, I felt like the old-school folky throwback, orphaned by genre. But today I feel in-step. The songs on Sisterly align with a larger movement among my fellow writers who are now feeling the imperative to use our art to speak boldly to injustice.”

Her songwriting on Sisterly addresses some of the pressing concerns of this moment: migration, incarceration, police violence, and an uncertain future, all delivered in groove- oriented songs that make sneaky use of odd meters and revel in the unexpected rhythmic twist.

Produced by her longtime collaborator, Liam Robinson (founding member of Becca Stevens Band, music director of Anaïs Mitchell’s Hadestown, and the other half of Jean’s duo, Robinson & Rohe), the production maintains the pointedness of Rohe’s songwriting/arranging while making creative use of the studio’s riches. The resulting layered sonic landscape marks a departure from her previous, more acoustically- oriented record, Jean Rohe & The End of the World Show. Rounding out the core band are long-time friends Christopher Tordini (bass), James Shipp (percussion, synths), Jordan Perlson (drums), and Bob Lanzetti (guitar).

Whether mediated by devices, conducted across oceans, passed through prison bars, or directed at an inner critic, each song on Sisterly contains an urgent missive for this moment. Rohe’s strength is in binding these themes together with sharp language and her broad musical imagination, yielding an unexpected marriage of word, sound, and story: strands in the same braid.