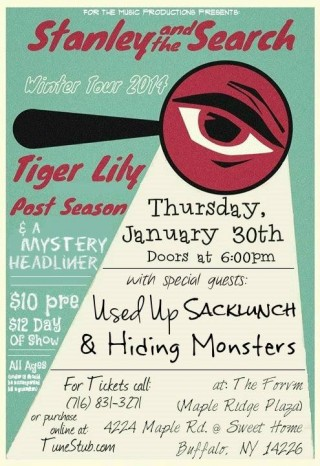 Head North is a statement; choose your own path. Rolling out of the Buffalo, NY music scene, Head North has repelled the forces of symmetry in an effort to create something truly unique in a genre already so empowering. With the driving force of pop-rock combined with the raw power of punk, Head North touches on all aspects of the human condition. With their debut release of “Arrows” featuring the band’s original vocalist James Celeste, Head North created massive buzz, charting in over 1,500 total copies sold all across the East Coast. Soon after, guitarist Brent Martone took over the role of lead vocalist, adding his unique gritty texture to the already polished sound. Head North released an acoustic version of their previous release, “Arrows” in order to help acclimate to the new change. Head North became a dynamic never heard before, featuring members Brent Martone, Ben “Boon” Lieber, Alex Matos, and Nick Iacuzzo. With an uncompromising tour schedule, and an uncanny release history, Head North has no plans of stopping. “We all discovered at a very young age that this is what we were meant to do with our lives.” says drummer, Boon Lieber. “It’s what keeps us sane; the reason we get up in the morning. We are beyond thankful for an amazing hometown scene to allow us to grow into the incredible force that we are today. Our only way to pay it back is to never stop moving. See you at a show.”

The Pop-Punk scene is making a strong comeback. Many new bands are being formed and old bands are catching a second wind. With all these bands out there it can be hard to determine which ones are the real deal.
In this new revival of the pop-punk scene the guys in the Oklahoma City based band "Tiger Lily" are taking a back seat to no one. Tiger Lily brings a new refreshing taste to the pop-punk scene all while still maintaining that older sound that made pop-punk such an important genre to millions of people. With all the members from different states and different musical backgrounds, Tiger Lily has a unique sound that kids will love. Their passionate vocals and powerful music make Tiger Lily a strong forerunner in the Pop-punk scene.

Post Season is a punk pop band from Altoona, PA. With ex-members of Nothing to Prove and Handguns, this band is sure to knock your no-show socks off. Their debut album is available on Bandcamp through Broken Rim Records!

"We're a 3 piece band from Buffalo, New York.
We write sad songs to make you happy.
We'd like to think our songs are kinda good."

"We're a power trio of 3 dudes. We love music, and we love to screw around. But at the same time, we take our music very seriously, and we love it. Come jam with us at a show, we would love to see you there!"

"We're the Hiding Monsters, and we're unlike anything you've heard before. Take the time to check us out! We're a trio of friends from Ckeektowaga, NY. We all have an incredible passion for music, which we'd like to share with the world."