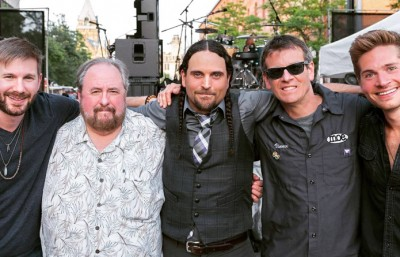 Floodwood is a progressive string band from Central NY featuring the combined talents of Vinnie Amico (moe.), Jason Barady, Nick Piccininni and Chris Eves. With “bluegrass instruments” (plus drums) these 5 musicians from varied backgrounds show that music knows no bounds. At a Floodwood show you can expect to hear everything from traditional sounding bluegrass to Jessie J, jazz to the Grateful Dead…really just anything and everything.

As for what you will see at a Floodwood show; the band wishes they knew too. They combine brother-like rivalry, their passion for music, a lot of laughter and a heapload of energy into one very entertaining performance. Anything can happen with Floodwood…

…and they will make you part of it.

Vinnie Amico has been playing drums professionally for nearly 30 years, 20 with jamband mainstays moe. Vinnie has been with Floodwood since it’s inception 5 years ago. Vinnie is influenced by many musical styles including rock, jazz, bluegrass, reggae, country, and world music. Those influences shine bright in Floodwood…

Jason Barady spent over 10 years recording & touring with the Bluegrass group Wooden Spoon from Taos, until returning to his hometown in central, NY. An influential part of his local music scene, Jason plays with an unyielding energy and creativity on both local and national stages. Fans have been known to refer to him as “the Hendrix of Mandolin”.

Nick Piccininni is a self taught banjoist/fiddler who learned his bluegrass chops the old fashioned way – in picking circles at his favorite bluegrass festivals. He has been involved in many projects including touring for two years with CMA recording artists, The Abrams Brothers. Nick arguably smiles the most of anyone in the band.

Chris Eves, from the band Castle Creek, is an accomplished guitarist and multi-instrumentalist. He has shared the stage with The Zac Brown Band, Jon Fishman of Phish, Johnny Lang, John Popper and many others. He also played guitar for American Idol and is featured in the film Star Trek Nemesis.

The sound of PA Line proves that in the current musical world of repetition and catchy leads, music can still hit you in the heart. By combining dedication and raw talent, Trever Stribing (lead vocal/guitar/percussion) ,Lucas Honig (vocal/Bass) , and Alyssa Wainwright (violin/vocals) have made a unique brand of alternative folk music influenced by artists ranging from Mumford and sons to Sly & the Family Stone.

Their high energy creations have received recognition around the country in New York, Ohio, California, and Florida, just to name a few. As well as a tour in the UK, with a summer 2017 return tour.

They currently have 2 albums out, “Liar” and “Breathe” ,and are in the works to start recording for a third. Having been playing music together for almost a decade, Their parallel drive and catchy rhythms are something you’ll never forget.