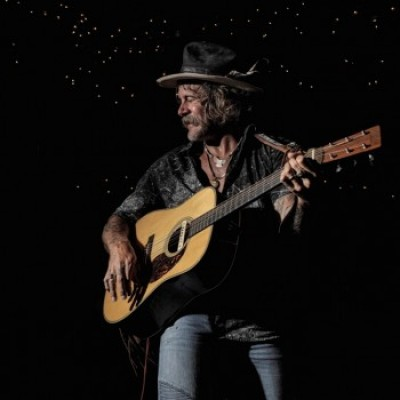 Donavon Frankenreiter’s new album, “The Heart,” officially marks the start of the singer-songwriter’s second decade as a solo recording artist. It’s been over ten years since the release of his self-titled debut, and in that time he has grown, not only as a musician, but also as a man. He’s raising a family and nurturing two creative careers-one onstage, one in the waves-but on top of all that, he’s still learning what makes him tick. And so, naturally, he named his album after his ticker.

The songs here are seriously sentimental, without question the heaviest material he has released to date. Part of that inspiration came from his co-writer, the prolific songwriter Grant-Lee Phillips, with whom Frankenreiter had collaborated in the past on his album “Pass It Around.” He recognized the ease with which the two worked together and sent Phillips a handful of new tunes and ideas. He was astonished at the brilliance of the songs that came back, and so quickly, but also by one of Phillips’ suggestions in particular.

“Grant told me, ‘You should make the most intimate and honest record you’ve ever made,’” says Frankenreiter. “So these songs are simple and intimate and honest, they aren’t cheeky. There’s some ups and downs-I love writing positive songs and happy tunes, but there are some downers here. I feel like it’s where I’m at, 42 years old. Every one of these songs means a lot to me. They’re from the heart.”

To record them, Frankenreiter booked two weeks of studio time in May of 2015 at Blue Rock Studios in Wimberley, Texas. But unlike the privacy afforded by most studios, these sessions were to be live-streamed on the Internet in a soul-baring exhibition for his fans-talk about intimate and honest. With just two bandmates and a studio engineer, Frankenreiter knocked out a song each day and recorded the entire album in full view of a watching public. He had never been so inspired, and embraced every aspect of the situation: the landscape, the lodging, the isolation, the overall challenge.

“We went in saying, ‘Let’s make the best record we can that we enjoy,’” he says. “And not that I didn’t feel that way about my other albums, but this was the one that felt the most natural. Even the way we made it, too, a song a day. I went into it feeling a little pressure, this whole live-streaming thing; if we hit a rut the first day, we’re screwed. But the first day we cut ‘Big Wave,’ and it was off to the races.”

The nature of the recording environment removed any “fuck-around” time and replaced it with the utmost efficiency and excitement. As Frankenreiter says, it was an experiment, and it invigorated the band, resulting in their most cohesive process to date.

“There’s something magical about Blue Rock Studios and Wimberley, Texas,” he says. “It’s really powerful, that’s one spot that is really bitching. This place is beautiful, a huge estate on 50 acres, cows walking by the windows while you’re recording-this open, amazing wilderness. We lived in the studio, and to record there and never have to leave, that’s the first time I ever made a record that way. Every morning you wake up and hit it again. I was in such a bubble; it was all about the music. I think about it now and it’s emotional.”

A decade into his career, Donavon Frankenreiter has learned to listen to his ticker above all else. Doing so has allowed the light to come in from all the corners of his world, even those where there is darkness. Sharing the load with those he trusts, and especially with those he loves, he has seized the opportunity to take control of his craft, on his own terms, and to follow his own beat.