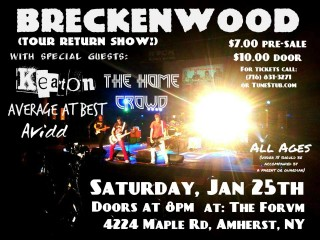 The current lineup of Breckenwood was formed in March of 2011 consisting of Garrett Shea, Will Folckemer and Cam Kukla. Since then, the band has performed all over the North Eastern region of the US. In March of 2012, the band was signed to idie label, Buzz records and released their debut album, Take Me There, on iTunes, Amazon and hard copy in November 2013. Recently, the band has performed at The Niagara Falls Music and Art Festival, Robby Takac's Music is Art Festival and selected to perform at the 44th Anniversary Woodstock Festival. With an ever growing fan base, Breckenwood is showing no signs of slowing down, and plans on coming into 2013 with more shows than ever.

Keaton was born January 2011 by life long friends Joey and Aaron in the back of local dive bar. Reminiscing over the "good ol' days' of their past musical endeavors, the idea of creating a new "super group" sprang about over a few pints of their favorite adult beverage. With the over abundance of hardcore and metal bands on the scene, they decided to go back to their roots. Looking to capture that Pop Punk sound and energy that that got them through their younger years. Joey and Aaron recruited new comer to the music scene Spenny on Bass and an old friend Stephen on Drums. Together they have been captivating audiences ever since. Making sure every song has a hook and a catchy beat, their fan base grew and continues to gain new fans every time they hit the stage. With the recent additions of Keith keys/guitar and Mac (ex A.T.S.O.C.) on guitar, Keaton has solidified it's line up with a cast of characters that would best be suited for it's own reality TV show.

The Home Crowd is an up and coming Party Punk band from Buffalo, NY with the tunes to fit your everyday mood. After forming in early 2010, The Home Crowd has made a big impact on the WNY music scene. The Home Crowd is made up of Matt (Brody) Lesakowski who is the lead vocalist and guitarist of the band, Geoff (Ge-hoff) Grey who is also guitarist and vocalist, Jon (J-Lezz) Lesakowski who is the bassist and vocalist and Alex Blum as the newly added drummer. Together they form a genre like no other. Influences of The Home Crowd range from all different types of music from "The Beatles" to "Blink 182" to "Sublime" and "The Used" which many say "reflects in their music". With their catchy vocal melodies and harmonies, their driving breakdowns and melodic guitar riffs, The Home Crowd is one band with a little something for everybody, that always leaves you wanting more.

From pop medleys, to extended rock fueled jams, to catchy originals you'll whistle on the way home, an Average at Best show provides something everyone can enjoy. Their combination of outstanding musicianship with clever humor means that you'll never stop laughing and tapping your feet. Don't miss out the next time this band is in town.