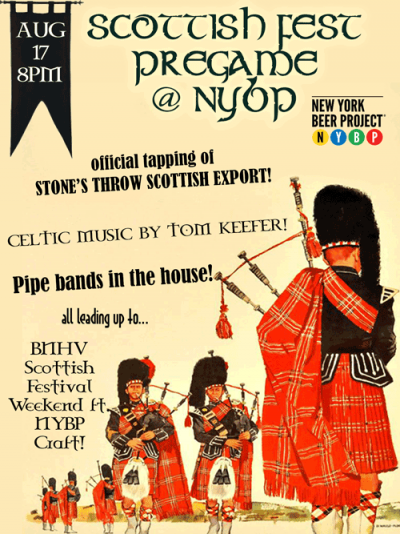 Ah… 'tis indeed the party that everyone still talks about … The Scottish Festival Pre Game Party at NYBP! There were bagpipes all over the house, kilts, Scottish drinking songs, more kilts, Scottish beer releases, wool socks in the summer, fiddles, Scottish tales, yet more kilts... and the best part? It’s about to happen again.

This year's festivities include Scottish music and drinking songs performed by Tom Keefer and his band Tom Keefer and Celtic Cross, a special appearance from the Buffalo Niagara Scotia Society Pipes & Drums, as well as the ceremonious tapping of Stone's Throw Scottish Export! Kilts are optional, but if you don’t have one, you have to explain to a very large Scottish man why you aren’t wearing one at this one-of-a-kind celebration where Scotland comes to The Beer Project. Lang may yer rum leek (Cheers!)