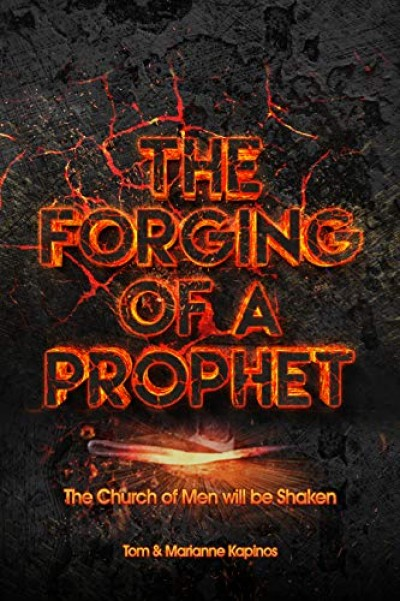 Tom and Marianne Kapinos of West Seneca, authors of “The Forging of a Prophet,” will visit Dog Ears Bookstore & Café for a book launch and signing event from 6:30 to 8:30 p.m. Friday, April 12. The nonprofit bookstore is located at 688 Abbott Road in South Buffalo.

“To be clear, my wife and I have never before written a book, nor are we teachers or scholars, or pastors, nor have we been accorded the accolades of men,” said Tom. “The credentials we possess are our experiences with God and being fully known by Him. These experiences, more valuable than anything the world has to offer, are the reason we share them with you throughout this narrative.”

“Within the pages of this creative nonfiction narrative are riveting supernatural God encounters beginning with a journey through the occult,” he added. “Join us on a supernatural sojourn of visions revealing snippets of evidence connected to five murdered co-eds from Gainesville, Florida, in 1990. A subsequent airplane ride to Florida with a television producer, film crew and a parapsychologist followed in an attempt to locate the murder weapon. The Gainesville murder visions were a revelatory introduction into the spirit realm at a depth of which we were unfamiliar. It comprises a very small portion of the book. They were but mere steps in our journey.”

Married for 48 years and business owners in the window and floor covering business for the last 40 of those years, Tom and Marianne Kapinos are now semi-retired. They are blessed with two grown children — a married daughter who gave them two precious granddaughters and a soon-to-be married son.

After hearing the call of the Lord, Tom and Marianne directed an outreach ministry and Christian Fellowship in Lackawanna. Part of that outreach included depicting the crucifixion of Christ. Traveling the local major highways and byways, their re-enactment was soon dubbed the “Living Billboard” by The Buffalo News and both Channels 4 and 7 in Buffalo.

To learn more about Dog Ears Bookstore, please visit dogearsbookstore.org or call 823-2665. You can also follow the bookstore on Facebook for frequent updates.