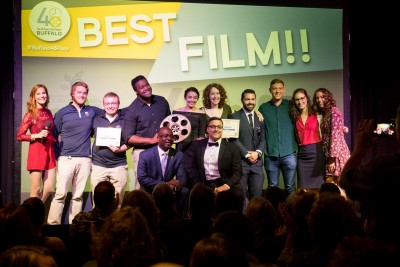 The 2018 Buffalo 48-Hour Film Project Screening Weekend will be held on August 18-19 at the North Park Theatre on Hertel Avenue. Up to 26 films will premiere made by local filmmakers for the Buffalo 48 Hour Film Project filmmaking competition.

The films are produced in their entirety August 10-12 by teams of local filmmakers who will put their skills to the test. They have 48 hours to write, shoot, and edit a 4-7 minute long short film. Up to 26 teams of filmmakers are expected to compete in this year’s event. Novice and experienced filmmakers are put on a level playing field by only having 48 hours to make a film. Anyone could win and move on to have their film screened at Filmapalooza Film Festival in Orlando, Florida where they will compete against the winners from 130+ other competing cities for more awards and the opportunity to go to the prestigious Cannes Film Festival in France.

Whoever comes to the film screenings on August 18 and 19 will have the chance to vote for their favorite film and decide who will be the audience favorite. Come to North Park Theatre and watch some amazing Buffalo films made in only 48 hours!

Tickets for the screenings are $10.50 and will be available on North Park Theatre’s website at www.northparktheatre.org.