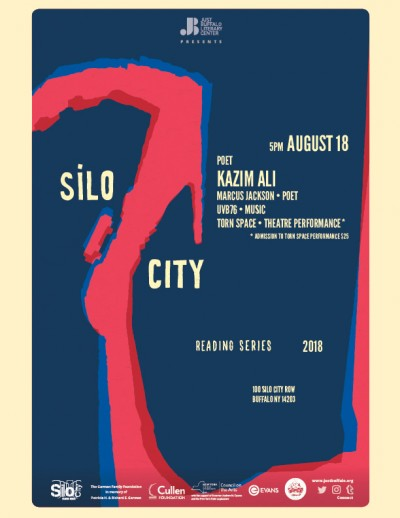 Kazim Ali was born in the United Kingdom to Muslim parents of Indian, Iranian and Egyptian descent. He received a B.A. and M.A. from the University of Albany-SUNY, and an M.F.A. from New York University. His books encompass several volumes of poetry, including Sky Ward, winner of the Ohioana Book Award in Poetry; The Far Mosque, winner of Alice James Books’ New England/New York Award; The Fortieth Day; All One’s Blue; and the cross-genre text Bright Felon. His novels include the recently published The Secret Room: A String Quartet and among his books of essays is Fasting for Ramadan: Notes from a Spiritual Practice. Ali is an associate professor of Creative Writing and Comparative Literature at Oberlin College. His new book of poems, Inquisition, and a new hybrid memoir, Silver Road: Essays, Maps & Calligraphies, will both be released in 2018.

Marcus Jackson earned a BA from the University of Toledo and continued his poetry studies at NYU and as a Cave Canem fellow. His poems have appeared in such publications as The American Poetry Review, The New Yorker, and Tin House. His first collection of poetry, Neighborhood Register, was released in 2011. His second collection, Pardon My Heart (Northwestern University Press/TriQuarterly Books), was released in April 2018. He lives with his wife and son in Columbus, Ohio, and he teaches in the MFA programs at Ohio State and Queens University of Charlotte.

Formed in 2010 in Buffalo, New York, UVB76 is the electronic music and non-music project of Sherri Miller and Mario Fanone. Known for their stimulating rhythms, mutant melodies, and non-melodies; UVB76 cannot be confined to any specific genre. Their constantly evolving live performance often incorporates both multimedia and non-media elements. Listen at https://soundcloud.com/u-v-b-7-6

Purchase tickets in advance for $20 enter the promo code – jblc