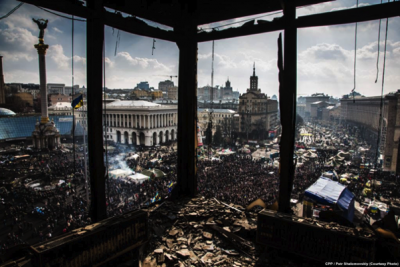 You are invited to a special event to commemorate the events of 2014 in Ukraine. Known as the Maidan: Revolution of Dignity, plus an update on the opportunity to become an Election Observer for the upcoming Presidential elections in March.

What was the cost of dignity? During the Maidan, many Ukrainians put their lives on hold to protest, most often risking their safety.  Some paid the ultimate price with their lives. After the Maidan, Ukraine lost Crimea through illegal Russian annexation. Ukraine is currently engaged in an ongoing war that has lasted almost 5 years.  Putin’s determination to destabilize Ukraine is now focused on the upcoming Presidential election, and later this fall, the Parliamentary elections.

Keynote speaker at this event will be Andriy Futey, Honorary Counsel of the Honorary Consulate of Ukraine for Ohio and Kentucky, President of the Ukrainian Congress Committee of America. A dramatic film regarding these important issues for Ukraine will follow. Information will also be provided on how to become an Election Observer in Ukraine - a unique opportunity to protect the hard fought right for free and fair elections for Ukrainians, without Russian interference.  More details to follow.

In addition, beverages and Ukrainian cuisine will be available as per our Friday night tradition starting at 5:00 PM.  Ample parking also available. For further information contact Yuri Hreshchyshyn @ 716-238-1731 or yuri.hreshchyshyn@gmail.com.